Sometimes the coolest things don't succeed, there's a meme for that and all, but failure's just one of the more unfortunate parts of life. Bone Age by Kenner is one of those things that seemed too cool to fail and somehow did. Basically a prehistoric version of M.A.S.K with the additional play value of modular toy design worked into the mix. The series wasn't around long, no cartoon, just some toys and a kids meal promotion. There was more toys planned, but they never came out. 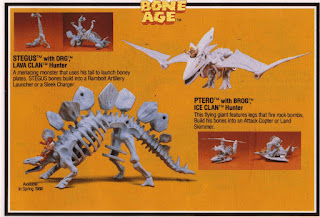 The toys were dinosaur skeletons driven by cavemen that could convert into a vehicle of sorts by disassembly and reassembling (called parts forming in the Transformers world) the bones from one form to another. The caveman would be from a different warring clan and usually had a dinosaur skull helmet that could be removed and some weapons. They were generally well sculpted and around the same size as a M.A.S.K toy. With the removable helmets and conversion gimmick, I wonder how come it wasn't tied into M.A.S.K in some way. It's not hard to imagine they were at some point in the planning period. Though Kenner's Sky Commanders were also pretty similar as well. So maybe it was just a house style. 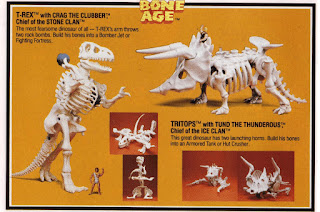 I don't have to tell you that I thought they were great. What's not to love? A cool dinosaur skeleton that turns into a helicopter with a tiny little caveman dude who wore a skull. If the line was a bigger sucess, I'm sure the satanic panic groups would have had a field day with this one. How wouldn't they, it's pure heavy metal. Skeletons just walking around with a skull wearing caveman beating the crap out of one another by any means necessary. ANY MEANS NECESSARY. Think you're putting up a fight? Well, my skeleton can turn into a skeleton tank... yours turned into a plane. I'm going to use my skull helmet magic to shoot missiles from the horns of my DINOSAUR SKELETON TANK. Somebody at Kenner was crazy in the best way possible.
at May 24, 2019
Email ThisBlogThis!Share to TwitterShare to FacebookShare to Pinterest
Labels: bone age, cavemen, commercials, dinosaurs, Kenner, m.a.s.k, toys, Zone Base