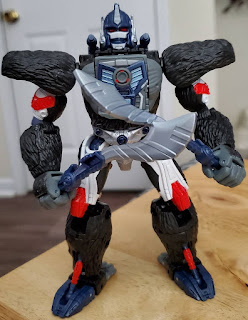 I've been pretty excited Kingdom toys to come out. I figured it'd be around March when they started showing up, so imagine my surprise when I stumbled upon Optimus Primal at Target when running a few errands this morning. He was the only one out, so I don't know if I just got lucky or one found it's way out from the back. The rest of the section looks much like it did about two weeks ago. Well, aside from a fancy new section header. So maybe the rest will get stocked soon.

I was thankful to get him too. I love Transformers as a whole, but the beast era is without a doubt my favorite part. An updated gorilla Primal as part of the main line is just the bit of awesome I need to kick off what I hope to be a great year.

Optimus is a voyager class toy who's a little smaller than they've been in the past. I recall reading somewhere that Kingdom toys would be, but mentally put it in the rumors section of my mind. Oddly enough he's about the size of a Beast Wars mega class toy, but more expensive than the ultra class. Which was what they called voyagers back then. Things change dude. 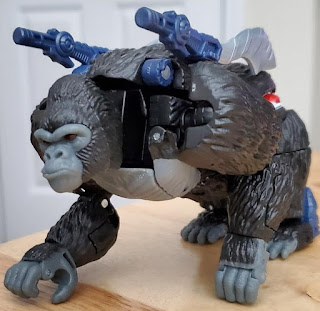 If you're new to Transformers, Optimus Primal isn't Optimus Prime and doesn't turn into a truck. He usually turns into a gorilla. Aside from his initial figure that is, which I really hope gets a core class update. This new toy is an update of the first gorilla Optimus Primal toy which he's most associated with. I've always liked the way this design looks. The mix of classic Optimus with King Kong is just fabulous. It just looks great.

In robot mode he looks ready to kick some ass. Big, beefy, and brandishing those trademarked swords. Speaking of those swords, Optimus retains his shoulder cannons and wrist guns from the original toy. He's missing that rad skull mace, however you can still get it separately. Primal has a lot of articulation, more than I initially thought he had. It's pretty neat and I'm sure those who pose their figures better are having a lot of fun with it.

Transformation is pretty easy. A common problem people had with beast era transformations is that they essentially stood up to transform. I don't have that problem, so I don't mind it. Just like Optimus Prime, Prowl, Bumblebee, and a lot of transformers before the beast era, Primal pretty much stands up to transform. You do adjust his limbs and twist around his hips to properly position them while arranging the back panels into place. The chest opens up to flip around his robot head and beast head out. It's pretty easy. I did have a little problem getting the beast head tucked away when transforming back into robot mode though. Not to the fault of the toy, I was just being a klutz.

Those swords I talked about up above store on his back in beast mode. There may be another place more inconspicuous to put them, but a giant gorilla carrying swords is pretty hard to not want. That gorilla has some well sculpted hair and a much better face than the original. I'm pretty happy with this guy. I had been looking forward to this so hard that getting one practically made me shit my pants. Don't look at me like that. I had Pizza Hut. I'm pretty surprised to find these already at physical retail and I'm not complaining either. This is a good update to a classic toy and I really hope that positive lead continues. I'm super looking forward to more Kingdom toys and hoping mainline beast warriors are here to stay.