Ghostbusters Get The Power Pack 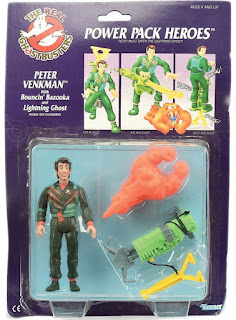 Every once and awhile there's new equipment for the Ghostbusters that seems like a step backwards. From the start of business they used lasers to hold ghosts and a trap to catch the ghost. Pretty strong start, but a step forward in equipment would be an improvement overall. Various new equipment to ensure bustin continues to make them feel good.

Then on occasion they got new equipment that makes me wonder if Egon had some sort of quota to meet. For example, the Ecto-Bomber plane. They mainly serviced New York City. Which is kinda hard to believe they got anywhere on time in the Ecto-1 already. Where did they land that plane anyway and who had the pilots license?

That brings us to the Power Pack Heroes around when Louis and Janine joined the ranks adding some variety to the line up. Kenner was clearly taking whatever idea they had and making it a toy. That's one of the drawbacks of a successful toy line: constantly coming up with new product.

The Power Pack Heroes are the Ghostbusters with new ghost busting equipment that by all means is pretty hit or miss. Ray has a capture claw type device, ok sure. Just it's inside a giant box he has to ride around on to use. Remember that big staircase they had to climb to fight Gozer?

For the most part the Power Packs seem pretty useful though. Janine has a little go-cart, and Louis has a big trap. Then there's Egon's new equipment and remember, he made all this for the team to begin with. His Power Pack is some sort of flight pack, which on the surface makes sense. He can take flight after a ghost flies away. However if you'll notice it's capture action in the commercial, the propeller turns toward the ghost and grabs it. So... does he just fall from the sky then? 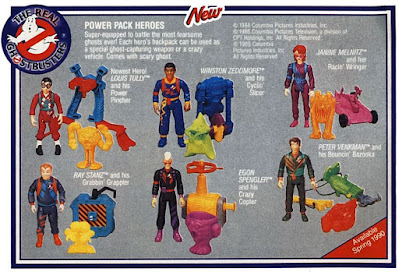