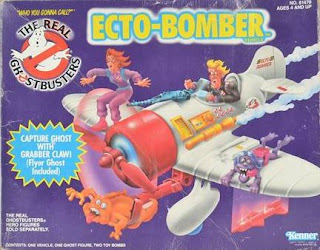 One thing I can never love enough about The Real Ghostbusters is just how insane things got. It's a far fetched idea to begin with. A group of guys who shoot lasers at ghosts. As a service, it's a solid idea. Your house is haunted? Call an exterminator. As the line went on though, lasers just weren't enough.

In the above commercial we're treated to Ray and Louis busting ghosts at the Statue of Liberty. Not only does it advertise the cool color changing Slimed Heroes figures, but also the Ecto-Bomber. Which is literally an early 20th century bomber plane outfitted to fight ghosts. How in the hell did they even get that?

The Ghostbusters outright bombed ghosts to bust them. Let's think of the implications of that one. In the commercial alone, Nasty Neck is terrorizing Ray on Liberty Island when the Ecto-Bomber drops a bomb from the sky...

It's safe to assume sometimes the Ghostbusters generated future business.