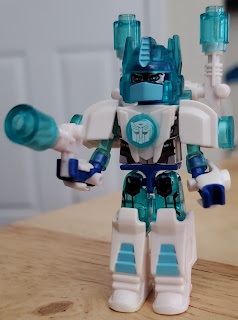 Remember that Soundwave I talked about yesterday? While at the Dollar General that day, the Mrs. saw the kreons and grabbed me a neat looking Optimus Prime. I was a big fan of Kre-O during it's run but slowed down during it's last years as a discount chain line. She saw these more deluxe Kreons with the add on parts on the pegs and grabbed me one. The Optimus Prime was differently colored than what his art depicted and she thought he looked neat. She was right, he does look neat.

While I have admittedly slowed down on the Kre-O stuff, it was fun revisiting it and frankly this Optimus was pretty cool. The toy is mostly in translucent blue and clear plastic with some solid white colored pieces. He's pretty dang sharp looking.

I had a hard time finding this version on the TFWiki, so I have no clue what they're actually called. They've had them at Dollar General for a while and I've just now gotten this one. Basically you get a Kreon with the parts to add on to make a more 'deluxe' figure. With all the parts added the figure has knees and elbows and stands a little taller. It's a neat little thing and I'm pretty tempted to get more now. 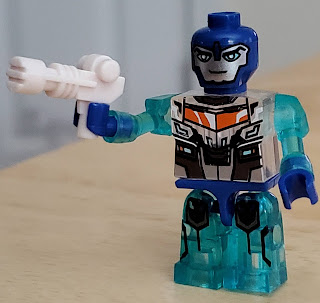 The funny thing about this figure is the base kreon. Without any of his extra parts, you pretty much have a Kreon Microman/Micronaut.When Kre-O was more of a thing, I thought Hasbro should have made Micronaut Kre-O sets. It seemed like the perfect fit to me. Years later, Kre-O technically still exists with a small amount of product available and I guess they just wanted the Micronauts name. Hopefully something will eventually come of it.

He could be a Henshin Cyborg as well I suppose, but my mind goes to Microman first. I've taken to calling him Microman Orion. A different helmet for the more 'deluxe' figure and he'd make a fine Acroyear. Now that I have essentially that Kre-O Micronaut I wished I had all those years ago, I really wish they would have made that line. The proportions are just right as is the sculpting.  Oh well, at least I have a cool Optimus Prime.