Soundwave Is A Discount Store Alpha 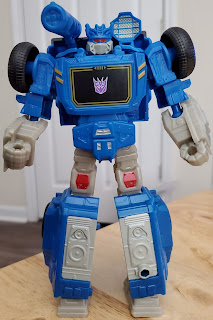 They call these larger 7 inch Authentics 'Alpha' class. I don't know why. They do the naming, I do the buying. Call it taco class for all I care. Recently my wife picked me up the Authentics Alpha Class Soundwave from the Dollar General near her work. Thankfully so as I've been looking for him. As far as the Authentics figures have gone, I've been getting the Alpha (7 inch) and Bravo (5 inch) class figures happily. For a low price they're just the thing. I haven't bothers with the Titan Changers or that big ass Bumblebee. I may later, just right now I don't feel compelled to.

Like other Authentics, Soundwave uses the 'Evergreen' design. Evergreen is a newer Transformers design aesthetic used for oddball things like gift cards and random toys without being attached to a current cartoon. It's basically traditional Transformers, just a little modernized. Safe to throw on that party balloon or discount toy that may be on a shelf for a few years without looking dated. I think it's a pretty good idea. You've got generic Spider-Man, Generic Batman... why not generic Transformers?

Soundwave as a robot isn't too bad. He's a discount store toy sold for a low price and there's some cost cutting measures in full view. He's $10 for a 7 inch toy, which is about the size of a Generations Voyager class Transformers. Those sell for $30 for perspective. Soundwave is pretty hollow. Like, know how the buildings in a movie studio are just a facade? The walls you see are the only ones they've built and that's the level of hollowness Soundwave has going on here. It doesn't bother me much. I know for the discount price there's going to be some cost cutting measures. I know a cup of ramen noodles isn't the same as an expensive steak dinner and I'm not going to kid myself about it. At the same time, I still love a good cup of ramen noodles. This cheap Soundwave? Yeah, I dig him. He's cool. 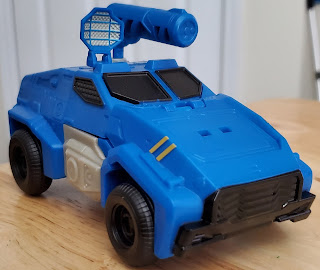 They don't make tape players anymore. I'm sorry, it's just a fact and those don't change unfortunately. Modern toys of Soundwave are generally tasked with working around that and a common alt mode for him is a communications truck of sorts. That's what they did here and it works pretty well. It's blocky and works with his role as communications officer.

This particular communications truck is some kind of armored sports crossover SUV. Considering the low cost of the toy, it's a pretty solid alt mode with hardly any visible lines. You transform Soundwave by arranging his arms and legs much as you normally do car based Transformes and his backpack snaps over to create the hood. All you really have to do extra is arrange his gun and uh... sound receiver dish (?) into place on the roof of the truck.

I'm kind of not sure what to make of the truck. It looks good, but could use a little extra color that the discount store toy budget isn't going to allow for. Thanks to it's angles I can't get Machine Wars Soundwave out of my head when I look at it. Stalker from Euro G1, Machine Wars or Universe Soundwave. That toy mold. The colors those toys came in are the ones I'd really like to see on this toy. It'll never happen, but it'd be neat. I see this truck and think there's another toy coming that'll use the mold tooling. Blaster or Sounblaster probably. 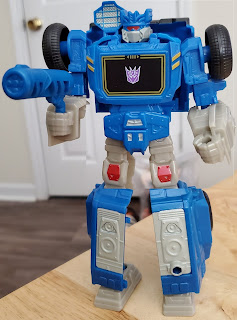 I mentioned his gun and communications thingy right? They can be used in a variety of ways. Either held in hands, on shoulder mounted pegs, or the roof of the truck. The communications dish thingy has a flat peg with specific flat peg holes for it's placement... but still fits just fine in round holes. The gun has a standard round peg and won't fit in the square holes. I shouldn't have to explain that, but there's always that one dude.

If you put the gun in Soundwave's shoulders like I have in the picture up top, you'll get a more classic Soundwave look. It looks right in hand ready to blast somebody too. The plastic used on the toy is different than what's used on normal retail Transformers. It's pretty hard and despite the hollowness of the toy gives it a feeling of solidness. You can probably see the stress lines on the gun in the picture. They were like that right out of the package without any visible reason why. It's not broke and there's no white in the plastic that would lead me to believe the plastic is weakened. I have no clue.

I'm pretty happy with Soundwave overall. He might be hollow, but he's a big chunky robot toy and I do love those. Without any doubt he's Soundwave and he nails the classic look. Like I said, for the low price these Authentics are just the thing and fun to buy. He's got a fair amount of articulation and I had fun playing around with him in my living room. You really can't ask for more than that. Unless you're an asshole.