Sy-Klone Will Punch The Shit Out Of You

On Eternia a tornado means an ass whooping is coming. Sy-Klone is a member of the Heroic Warriors who has the special ability of generating tornadoes. This leads to his specific way of attacking- a tornado of fists. When Skeletor and his band of living Halloween decorations attack, they usually hope Sy-Klone isn't around. Because when he is, he's going to beat the living shit out of everyone in his way. 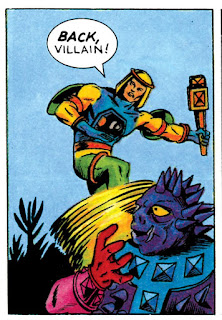 Personally I like the original better, but I've always admittedly to being extremely G1 about MOTU. MOTU is just how ridiculous and absurd and I love it for that. Here's this blue asshole who turns into a tornado of punches. What's not to love about that?