It's been a weird night year huh? Good thing it's the spooky season and we can find fun and laughter in cheap plastic fangs and pumpkin flavored everything. I've mentioned at the beginning of this years shindig that I was going to double dip and I meant it. But how can I not double dip when the pumpkin spice mayhem is so wonderful?

"Witch's Night Out" is a semi obscure Halloween cartoon from 1978. I say semi as every year it seems more people discover it's weird ass. A sequel to a Christmas cartoon called "The Gift Of Winter" (which was even weirder assed) about a Witch who shows some kids a good time on Halloween before her wand gets lost. Two local townies named Malicious and Rotten discover the wand and all hell breaks loose.

This was on my regular viewing list as a kid... and as an adult. After it's initial run on TV, Disney Channel would regularly show it during October (man, Disney is so good at Halloween). It's on one of those VHS Halloween mix tapes I've talked about here before, but thankfully it's widely available to view online. There's some top level talent here. Dan Aykroyd, Gilda Radner, and Catherine O'Hara to name a few. It's kinda amazing. 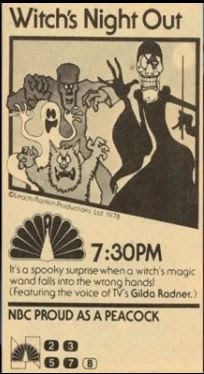