Disney does Halloween right. They do Halloween specials right. Somebody behind the scenes of The Mouse Factory did drugs wrong. I don't know if Phillis Diller did drugs, but I do know her name is slang for cocaine. Which I'm sure there was a mountain of offstage on this episode.

Spooks and Magic, the Halloween episode of The Mouse Factory features Phyllis Diller as the guest star going absolutely insane with Disney characters. At one point she's breaking into the Haunted Mansion and harassing the ghosts, the next minute she's having a Halloween costume party with Donald Duck. Said costume party doesn't sound bad until she shows them her batshit family slides then runs them off by singing.

The whole thing ends with her forming a witches coven with King Louie, Goofy, and Witch Hazel. The later is sent to Donald Duck's (who just left) house as a set up to the classic Disney 'Trick or Treat' short. In the end, Phyllis uses her evil witch powers to steal Snow Whites identity and... it just ends. That means she's still out there. 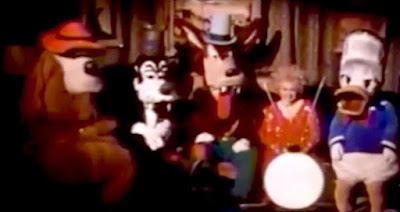