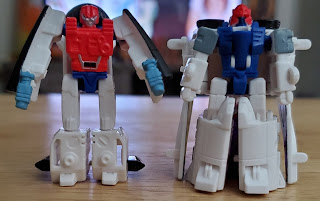 I was pretty happy to find the new Earthrise Micromasters at Target this weekend. I know I don't have to explain my love for Micromasters. I'd hope you've figured it out by now. As the norm since Siege, current Micromaster teams are released as a two pack.

Fuzer (Phaser in G1) and Blast Master are members of the Autobot Micromaster Astro Squad and combiners as well. Instead of a bigger robot though, the two combine to form a vehicle together. In this case, a Space Shuttle. Duh. 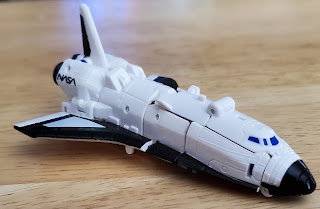 These two are pretty great. I loved the original Astro Squad and I'm really happy with this update. The updated articulation of modern Micromasters is really good here. Not to mention, the space shuttle colors and kibble makes for good looking robots. The additional reds and blues with those little hints of grey really pops.

While I really love Fuzer's molded in pistols, I like Blast Master a little more. The proportions from being the rear section of the shuttle makes for a great looking bot. It's a slim fraction in his favor against his team mate. Both are  great.

If I have any complaints, it would be limited more to my big fingers and folding together everything to make the combined shuttle mode. Which isn't any fault of the toys. I promise it comes together better than it does in the picture. Somebody just didn't take a new picture once he had them better assembled. Whoops. Once again, it's a great set and a solid update of an older couple of figures. If you're a fan of Micromasters, then you're going to be happy with these two. I sure am.