Can we talk Turbochangers for a minute? I mean, I'm going to anyway, but that's generally the way you start out when talking outside the status quo. I've never made my love for Turbochangers/One Step Transformers toys a secret. They're just the right amount of throwback to older super robot toys. Add in the low price and you've got something fun to collect casually. I buy regular modern Transformers still (I don't exactly make that a secret either), but variety y'all. It's a good thing.

Usually when bringing up a Turbochanger, you get some flack. Though there's plenty of folks who get it and just enjoy having  fun with their hobby. Oddly enough, some of the flack you'll get is folks saying they don't sell and are a failure... but they've been steadily on the shelves since 2014. I may buy a lot of these things, but not enough for six steady years of retail presence.

I remember initially being disappointed that they weren't smaller. Somehow I thought they were the size of Hot Wheels. When I picked up Drift and realized they were bigger, I was surprised. Then the little shit somehow went everywhere I went for a week or two. Kept him in my cup holder. That's ridiculous. I keep hoping for G1 ones, because I think that'd be perfect and Cyberverse is pretty close. The Tiny Turbo Changers are pretty close to that smaller toy I initially hoped for with smaller ones.

Thinking about what else I'd like in the format. Pretenders would be neat, especially Deluxe Pretenders. I think about these guys and wish Euro G1 bots would get worked in. G2 stuff also, they're too close in construction for it not to work. I don't know how to end this post, so I'll just stop here. 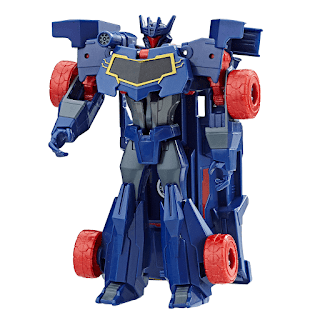