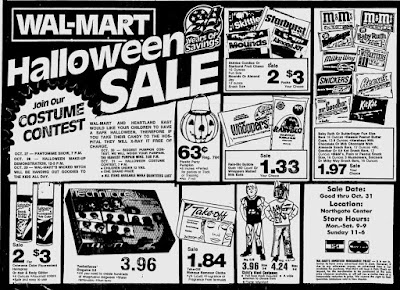 Halloween isn't free and nothing says I need to buy something better than a trip to Walmart. With those prices it's no surprise they're as big as they are either. You can load up on candy for trick or treaters only $1.97 a bag! BOGO 2 for $3 on Skittles and those are as good as full sized candy bars.


What the hell was the green nosed kid supposed to be?

Hey Look, Walmart is having a costume contest! We should grab something while there and win 1st place. They've got a few pretty good options. 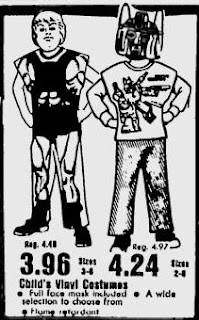 I've got time to win this now! And you've got the power to come in second! Walmart has costumes for around $4. That ain't bad y'all. We're gonna need to grab some of those pumpkin buckets though to go trick or treating after I kick everyone's ass in the contest. You know... I've heard about stuff some people do to candy at Halloween.


Good thing the hospital will x-ray our candy! I was pretty worried, I heard a kid died from one of those peanut butter things. You know... I'm kinda rethinking our costumes. Masks aren't as safe as make-up.

Dang son, we're going to win this contest for sure! We can use make up and be all sorts of cool things now! That Take-Off will come in handy later as well, I don't want to have weird color spots on my face at school. With make-up, we can be anything.


I'm going to win this thing now! What's that, you're going to be Dracula with green hair? Lame, with Kooky Spooks, your ass is grass and I'm the John Deer! What a great Halloween thanks to Walmart. Now let's go home and order pizza while watching the late night horror marathon.