The Bloody Pumpkin Is A Lie


Ever hear about that scene in Halloween where they find a bloody pumpkin with a knife sticking out of it? I used to hear about it all the time. That and how Michael Myers was based on a real guy. I'll get to the 'real guy' thing later, but for now I kind of want to chat bloody pumpkins and the Halloweens they weren't in. It's the weirdest urban legend as I never see anyone talk about it online. The Jason using a chainsaw thing? Yeah, I still see that occasionally. Bloody pumpkin? As offline as the official Bloody Pumpkin MySpace profile I planned on making in 2005.

It wasn't even that long ago my mom said it when I mentioned looking forward to the new Halloween (wait, that was 2018... ) and she said the original was 'so scary with that big knife sticking out of that pumpkin'. Clearly it's folks mentally combining imagery. Maybe just a little excited playground exaggeration from the one kid who's parents let him stay up and watch it mixed in.

See the commercial up above? It's an old school homemade spot for a local stations airing of Halloween 2. Homemade commercials used to be pretty common back in the day. Did you uh... notice Michael? Somebody got creative to make him look 'badass'. Making monsters look badass is a staple of Halloween and teenagers really into Ozzy Osbourne. Named Chet.

I think it's from some of these type of commercials where folks get that bloody pumpkin imagery. A bloody pumpkin with a knife sticking out of it isn't exactly rare at Halloween. I know I've seen one or two in the past. I've even poured fake blood over a pumpkin myself. Why not? Make it look badass. 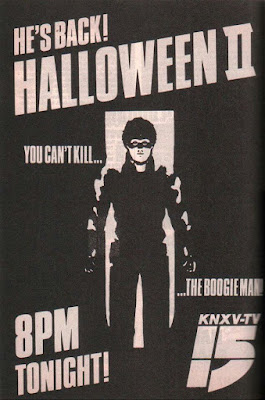