My Cyberverse Coat Of Many Colors

Sometime last night a siren rang out the most wonderful news, a song of new Cyberverse box sets. Not long ago I talked about the newer Warrior Class Starscream that seemingly transformed into the Vic Viper. As I said then and have said since, I'm not a seeker completist. Somewhere during the SCF/Heroes of Cybertron and Classics run... I had my fill. Though also like I said, this mold in multiple colors would change my mind. I'm very glad they're not 100% traditional in their colors.

Variety is the spice of life and man look at those seasoned space jets! I think Thrust and Skywarp are my favorite so far. They just pop. Thundercraker and Starscream ain't too shabby themselves. I kind of wish they were all new characters since the colors on the mold make them look like new characters. It's not a major gripe though. I'm just going to post that Gradius commercial again for good measure.

I am so bad at that game, but I love playing it. 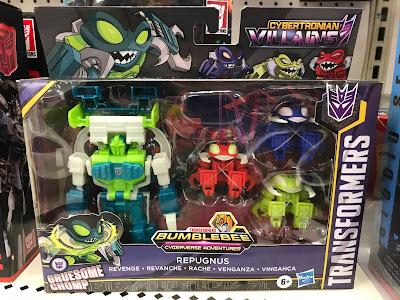 Another bit of wonderful news from yesterday, is the sightings of a Repugnus box set. From the episodes with the swarm of Repugnus bugs on Cybertron is this set of various members of that swarm. That beautiful green Repugnus is a recolor of the Turbo Changer I raved about not long ago and man is is sharp looking! The other members of the swarm (Pesticons!) are tiny new molds, not unlike the Sharkticons from the prior Hot Rod set. They may be from Tiny Turbo Changer origins, but the Sharkticons were a hard plastic and not rubbery. These look a little bigger as well, so I'm not sure. Maybe.

Regardless of mold origin, the multiple colors are absolutely wonderful. I love the Cyberverse rendition of Repugnus and am looking forward to adding more of him to the shelf my current one will eventually sit on. I just moved last month, I'm getting there. Since this one is so similar to the Hot Rod, I'm assuming it'll cost around $20. The seeker pack... that was an ebay leak, so who knows? I kinda imagine it's a Christmas item and wagering around $40-$50. Hoping they're easy to get as I must own these.