Repugnus And His Gruesome Chomp I had gotten Repugnus last month, but since I talked Whirl yesterday... I thought I'd just follow his lead. Repugnus is a damn treat. As you can see above in his monster mode... he's just adorable and wants to give you a hug. His clawed arms are decently articulated and by pushing the lever behind his head, you'll get a GRUESOME CHOMP! What the hell is that? It's his play feature frankly, but also it means those two tusks on the side of his mouth close.

As the norm for a Turbo Changer, transformation is simple making Repugnus's robot mode unfold from the monster form. He looks like his G1 toy quite a bit here, just a bit smaller. The arm articulation carries over here and it's a shame Repugnus doesn't have a gun or anything as he sure could pack one. He's a simple bot and that's part of where the fun is. With Turbo Changers the aneurysm from a piece of kibble blocking a basic joint needed is gone.

Simple is not a bad thing as he's chock full of character and charm. This is a cool toy and would fit right on in next to Whirl by your Genesis Mini while you work through that game of Streets of Rage 2. Perfect for fiddling with during a needed break after a drink from that ice cold beverage slowly saturating everything around it with moisture form the melting ice. Damn man, turn a fan on or something. 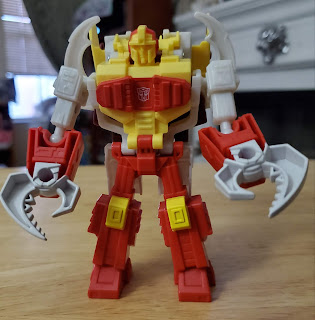