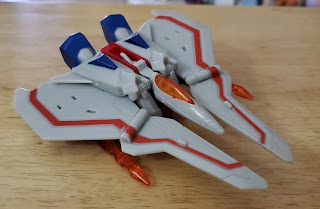 Since the new season of Transformers Cyberverse taking place on Cybertron, Starscream and the other characters are given new Cybertronian forms. In a breath of fesh air, Hasbro opted to do something new for Starscream and his seekers. Instead of the standard tetra jet Cybertronian mode, they went for a Vic Viper inspired look. This couldn't come at a better time as between various mini consoles and the Switch online service, the Gradius games have been getting some recent exposure. Even without the Konami connection, I really think this looks great. 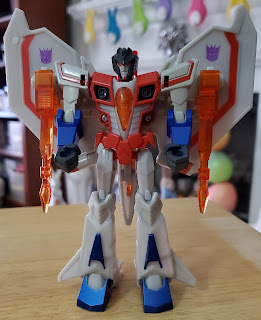 In robot mode however, Starscream is pretty much what you'd expect. I initially thought he'd be a retool of the prior seeker warrior class mold and was glad to be wrong. This is a much better toy with more articulation. Not enough to roll in a ball or whatever articulation fans might want, but decidedly more than the first warrior had. In fact he's in a sitting position within the packaging, which was pretty funny once I noticed it. 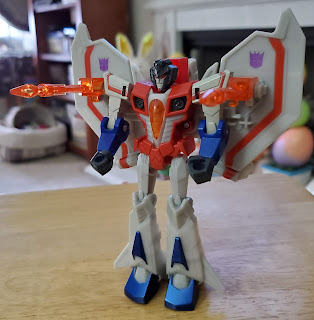 Warrior class toys in Cyberverse have an action feature and Starscream's is the awesomely named 'Starseeker Missile' playing off the standard null ray guns/missiles you get with practically every seeker toy. Moving the Vic Viper cockpit on the backpack springs them forward as if they were firing straight forward. The missiles are mounted on the wings, so it doesn't block his arms. As far as action features go, this one's ok enough. It doesn't interfere with the toy, so I can't complain.

However I had a hard time getting one to stay in it's non-deployed position. Resulting in each time moving the cockpit back and forth to get it to lock in. That wasn't the greatest. Spring loaded features that won't stay in place is a toy pet peeve of mine, so I can't say I was happy with that. Your mileage may vary though, this could very well be a figure to figure issue depending on various situations in manufacturing.

That's the one complaint I have in a pretty good figure. I get my Cyberverse warrior toys for $11 and for that amount of money am really happy with this toy. It's a big improvement from the prior warrior class seeker mold and with the Vic Viper homage, I might be persuaded to buy other seekers based on the toy mold. Meaning I probably will. 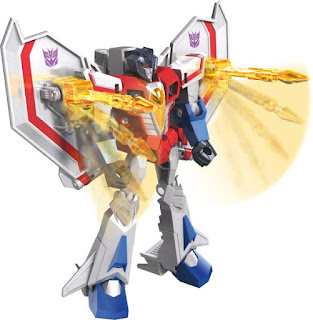