I picked up the Stay Puft Marshmallow Man figure from Hasbro's 'vintage' The Real Ghostbusters line this weekend. Just 3 more toys and I've got them all. I would say I hope they continue, but I already talked about that and what they're seemingly doing and I'm pretty ok with that. I already was into Fright Features figures because they were similar to the old Kenner toys before learning of the 'vintage' line. Though, I really just want to talk about Stay Puft for a moment.

There's something appealing about this absurd monster made of marshmallows. He's this big, cute, and non-threatening guy who's the physical embodiment of Gozer generally hellbent on destruction. He made a face turn in The Real Ghostbusters, but for most media, he's a villain. He's a giant physical paranormal manifestation. The realness of the shit isn't in dispute when he shows up. Also, totes adorbs.

In the 2016 move he was a parade balloon possessed by a ghost. I thought that was pretty great. Despite the movies flaws, the big end battle was pretty dang cool. After a lifetime of watching Macy's Thanksgiving Day parade, I associate such things with Time Square. A ghost parade? Right on. Stay Puft was completely threatening here, that was rad. 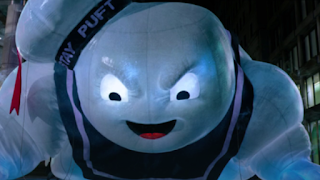 It's kinda hard not to like Stay Puft. He's silly, scary, cute, spooky and cuddly in a evil way. Part of me can't help to overthink a bit. The Real Ghostbusters are supposed to be the actual (you know, real) team that the movies are based on fictionally. I'd love to see a big budget movie adaption of the dream manifestation Stay Puft. Who wouldn't want to see that face turn at the movies? 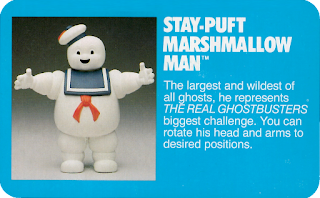