The things I did this weekend 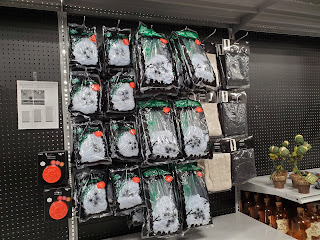 This past weekend was a somewhat crazy one. We had a bunch of things to do and not a lot of energy to do them with. After spending about an hour at the old place do last minute stuff before turning in the keys, we went to buy a few things you're not interested in. Nothing weird, but you don't care about the bogo sandal sale. Though while at Walmart I got The Real Ghostbusters Stay Puft Marshmallow Man and a Dino Strike 5 Surprise. The last one of those I got was in March included in the birthday gifts from my wife. I've been meaning to get more of them and think they'll be the subject of a post later this week.

After being up all night assembling our new TV stand, we went to At Home when they first opened to see what Halloween stuff they had stocked during the week. Ours is a little behind others, so we've been getting peaks on Instagram and already knew a few things that had to be got asap. While last weekend was just had aisles ready to be stocked, they had a small amount of said stock out this week. Just like last summer it'll be just a little at a time, and that's ok, it's freaking summer. I get it. Just having these little tastes of Halloween is heaven when you're bat pumpkin spice crazy like me. Which you are, I see the numbers.

This coming weekend we're going to skip At Home to give them time to stock as there's going to be weeks where there's not much added. That's kinda to be expected seeing as they're stocking in mid June for a holiday season a few months off. Not to mention, it'd be more exciting to see a bunch of stuff as opposed to just a little each week. HOWEVER, Jo-Ann's has started as well, so we will stop by and check up on what they have so far this weekend. Which is a holiday, so who knows what the shadow holds... that was lame. Pictures from the weekend's Halloween sightings are on my Instagram if you'd like to see. Feel free to gimme a follow too if you'd like.

at June 29, 2020
Email ThisBlogThis!Share to TwitterShare to FacebookShare to Pinterest
Labels: 5 surprise, at home, dino strike, ghostbusters, Halloween, the real ghostbusters, what the heck I did this weekend, Zone Base