Bad To The Bucket Of Sludge


It's been cool finding The Real Ghostbusters toys at my local Walmart again (when I can find them). I'm not knocking the other forms of Ghostbusters toys I've been getting at all, just there is a very particular charm to the old Kenner toys. The upcoming Fright Feature figures from Hasbro look to continue the vibe, which is appropriate considering they're named after a gimmick from Kenner's original line. They even come with little ghosts to bust and have individual packaged ghosts like The Real Ghostbusters line had. I've been thinking of them as a spiritual follow up to the line, and that's seeming like a fair comparison.

The reissues of Kenner figures almost plays into Fright Feature figures perfectly. While I know they're intended more for collectors, there's no way a kid could pass them up either. Specially not when hanging next to the PKE Meter and Ghost Trap. It's too cool! Well, maybe this is a limited release thing... but what a good lead in to Fright Feature figures that would take the spots on the pegs that the Kenner figures formerly held?

I really hope some of the more wild type stuff from the Kenner figures find their way to the new figures. The monsters, the crazy vehicles, and just the overall weirdness of the line. But, I also want it to do it's own thing too. Not just be more of the same, like take the lead and go from there. I really hope the line continues past the hype of Afterlife. Ghostbusters is just one of those things that just keeps keeping on and I'm thankful that it does. Something like this is the kind of thing I want to keep on buying. 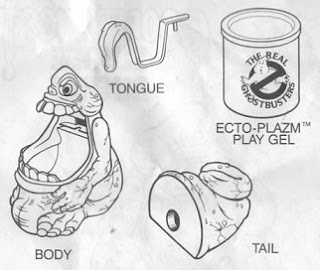