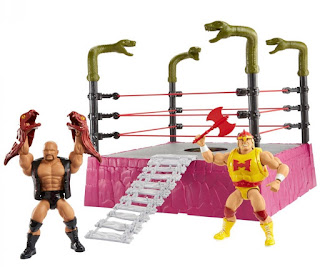 I had totally assumed Masters of the WWE Universe was going to end when MOTU Origins started, but here I am being wrong and happy about it. Previews of the new Rattlesnake Mountain set have been popping up on various toy news sites and let me tell you something brother, I want it. My luck with the line has been pretty spotty unfortunately. So far I haven't been able to find anything past wave one. Which is pretty disappointing as I've really wanted figures like Macho Man and The Undertaker.

I'm hoping this set will be like the Grayskull Mania bundle from last Christmas. They were pretty easy to find and hung around for awhile. You can get a Greyskull ring no problem, but the set with Terror Claws Triple H and John Cena was only around then. It just makes sense that this would be on a pallet for the holiday season. Give me a hell yeah. The theming of a Snake Men Stone Cold to match one of his shirts vs. Hulk Hogan as early He-Man is pretty great. And that's the bottom line, because Stone Cold Rob said so.