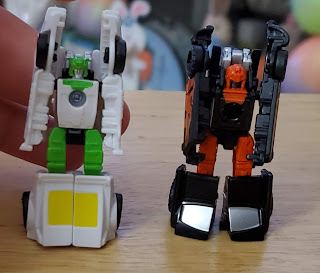 The Hot Rod Patrol was one of the most popular classicMicromaster teams. Nothing's cooler than classic muscle cars that turned into rockabilly robots. From the original gang, Trip-Up and Big Daddy return in Earthrise with updated toys. Though now Big Daddy is named Daddy-O for various trademark reasons and I kinda like it better.

The two benefit from modern toy technology and have much a higher range of articulation than their original toys. While it's still pretty limited in the eye's of many, it's still quite a bit for a tiny transforming toy. It's kinda amazing originals had as much as they did to begin with. If you'll notice my fingers holding up Trip-Up in the above picture (damn fool kept falling over), you'll get a pretty good idea of the size.  That and see a little bit of our Easter decorations. Cadbury Egg's y'all.

They transform pretty easily into their cool cars and like other recent Micromasters can combine into something they tell me is a gun. I forgot to take a picture, but thankfully Google Image search exists. Frankly the weapon modes don't really do much for me. I understand why they're implemented in modern Micromasters, but it's pretty rough. Though some are better than others. I do appreciate the idea of combining them and hope it works out into new incarnations of the G1 Micromaster combiners. I always liked those.