Kong Is King And This Toy Is Pretty Good Too 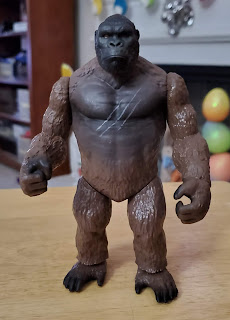 Playmates new Godzilla and Kong toy line is starting to show up at my local stores. My wife snuck a few of them into my birthday presents last week with much appreciation. Kong here represents his appearance from Skull Island in the standard line, while there is a larger figure available as well (I'm getting that too, no worry). I'm admittedly smitten with the Monsterverse's version of Kong, but dang I love this toy. While the Bandai toys that preceded Playmates line were sofubi figures, these new toys are outright action figures similar to the Trendmasters line from the 90's. I have noticed Playmates reissuing some of the Bandai sofubi toys, so maybe they're doing some distributing for Bandai as well. I'd love that.

Kong is roughly in scale with the standard kaiju figure around 6-7". He has a solid hard plastic body with a more rubbery plastic for his arms, legs, and head. Think of the build used in a 80's He-Man figure and you're not far off. Kong's arms and legs move classic swivel joint style like a Kenner Star Wars figure and now I'm imagining him driving an X-Wing. Not too shabby. His feet also swivel helping to stabilize him while standing. Those long gorilla arms can throw off the weight a bit. His head is on more of a ball joint allowing for a greater range of movement. This may not seem like much, but thanks to his nice head sculpt, it adds a lot more personality when having Kong look around.

I have a hard time not loving Kong or Godzilla as is. I literally feel my chest swell with happiness whenever the subject comes up. The amount of exhilaration I felt as I was playing with this toy, let alone talking about it now, is off the charts. I'm really happy Playmates took over the license. Not that I didn't love what Bandai has been doing, it's because I'm so happy with this toy. I'm excited for the line in general and look forward to more releases. When the Kong Vs Godzilla movie comes out, I might go nuts grabbing figures. I've seen a few leaked pics and man they look great.