Despite his often displayed smile, He-Man had it pretty rough. At any moment he'd have to defend Eternia against Skeletor and his walking Halloween decoration army. Fortunately for He-Man they're pretty incompetent. The Evil horde though, not so much. The Halloween decoration comparison is one I usually make when talking about He-Man, and it's a pretty fair description. The satanic panic of the 80's and 90's often used Masters of the Universe as a talking point and it's not hard to see where they're coming from. Skull faced wizards and castles make for common scary stuff. Hordak and his crew turned the spooky shit up to 11.

One thing I've always admired about The Evil Horde is the bat symbol. Just this great symbol of unification among the members that not only signifies their allegiance, but looks cool as hell. There's also the gargoyle head crossbow that nearly every member comes with. I certainly appreciate the uniformity the group posses. As much variety each member brings, they all still rock the symbol and pack that crossbow. Even walking nightmares appreciate team solidarity. 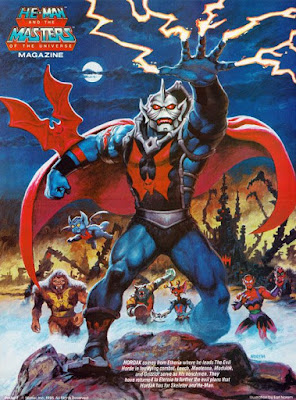