Earlier today I was playing with my new Master of the Universe Mega Construx figures and found myself thinking about what old stuff I'd like to see in the line. Which lead me straight to thinking about the awesome Fright Zone. The most somebody glued together some Halloween decorations He-Man bag guy spooky shit ever. It's every haunted cave you've ever seen and sold to small children. He-Man and his crew was the target of a lot of the Satanic Panic of the 80's and they kinda had a point. 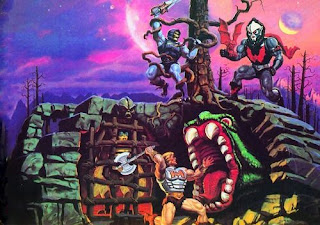 Regardless, it was a cool play set with all sorts of scary stuff included. You had the before spoken haunted cave with a gnarly prison. A scary ass tree that would grab you without consent. But the most horrifying and diabolical feature... the puppet monster that'd eat the shit out of you. Thirty something years later and it just now occurs to me that the prison is a red herring. Yeah He-Man, just try to rescue Buzz-Off as seen in the above picture. Boom, monster eats your whole ass. 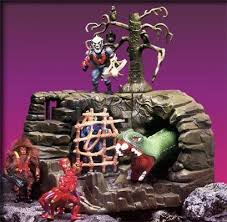 I don't know if you took notice in the commercial way at the beginning in my typical way of using old commercials to set the scene for a post, but the monster did not ever actually say The Fright Zone. Neither did the tree or Hordak even. It was just some guy yelling off screen. I cannot just explain how much a classmate of mine didn't believe me when I told him the monster doesn't actually say 'THE FRIGHT ZONE'. In hindsight, maybe his did.
fright zone Halloween haunted cave He-Man hordak Masters of The Universe mattel retro skeletor Spooky the evil horde the fright zone Zone Base