When I was in middle school, a few friends and I had a LCD handheld gaming circle going on. Before I go any further, I'll remind you of just how cool I am. That would be not at all, you've read this site before right? While they were far cheaper than a Gameboy (which we'd all get later), the little things were still just pricey enough to not get a new one often. Swapping them with each other over a weekend worked out pretty well.

I'll let you borrow my TMNT 2 this weekend if I can borrow your Double Dragon. Hey, I got Terminator if you wanna play it and I can play your Sonic. That sort of thing. Nobody wanted to play anybody else's Radio Shack games.

Of course as I noted just above, we all eventually got Gameboys and left LCD games behind. Lately I've been watching old commercials for these games. A little nostalgia kicking in mixed with appreciating the things that made them fun I guess. Ever have those moments when the world works in tandem with exactly what you were thinking? Weird huh? Hasbro announced plans to reissue several Tiger Handhelds soon. That's pretty dang cool. I'll definitely get the Transformers one. I don't think I ever saw it at any stores when it was initially out. I might get some of the others. Admittedly I'll be doing this for the novelty of getting them again more than anything else. I've certainly moved past the game play style they offered, but not past appreciating them. 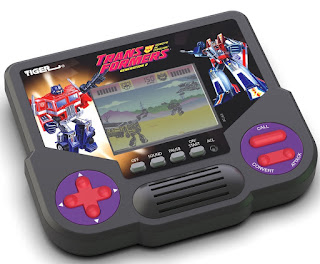