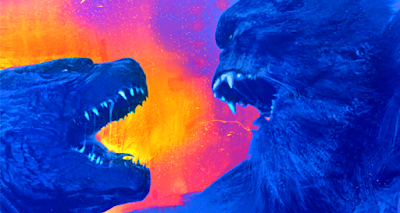 Two Iconic Titans to Clash On-Screen and at Retail with Exciting Godzilla vs. Kong Global Programs

The epic blockbuster’s retail and merchandise partnerships to provide fans a robust offering of products and experiences in time for the November 20, 2020 release

“Godzilla and Kong permeate every aspect of pop culture, and we are excited to bring them back to the forefront of the zeitgeist with our best in class partners,” said James Ngo, Executive Vice President, Franchise Management at Legendary Entertainment. “We are also working to expand this program into gaming, fashion, sports, food & beverage, and more, in order to create additional entry points for fans to engage with these two larger-than-life titans.”

“Godzilla has become a beloved international figure since its first film nearly 65 years ago,” said Keiji Ota, Chief Godzilla Officer (CGO) of Toho.  “We’re thrilled to work with these companies to bring the awesome power of Godzilla vs. Kong to life with toys and products for kids of all ages.”

Additionally, the Godzilla vs. Kong publishing program, which is being rolled out by Legendary Comics, will include two graphic novels, an art book, novelizations, and children’s books, offering fans a chance to delve deeper into the adventures of the great Godzilla and mighty Kong.

About Godzilla vs. Kong:
On November 20, 2020 comes the next chapter of the Monsterverse, Godzilla vs. Kong, which stars Alexander Skarsgård, Millie Bobby Brown, Rebecca Hall, Brian Tyree Henry, Shun Oguri, Eiza González, Jessica Henwick, Julian Dennison, Lance Reddick, with Kyle Chandler and Demián Bichir and is directed by Adam Wingard. In a time when monsters walk the Earth, Godzilla vs. Kong explores humanity’s fight for its future as the titans are set on a collision course resulting in a spectacular battle for the ages. Fans can join the conversation by using the official hashtag: #GodzillavsKong on social media.

About Legendary:
Legendary Entertainment is a leading media company with film (Legendary Pictures), television and digital (Legendary Television and Digital Media) and comics (Legendary Comics) divisions dedicated to owning, producing and delivering content to worldwide audiences. Legendary has built a library of marquee media properties and has established itself as a trusted brand which consistently delivers high-quality, commercial entertainment including some of the world's most popular intellectual property. In aggregate, Legendary Pictures-associated productions have realized grosses of more than $17 billion worldwide at the box office. To learn more visit: www.legendary.com.

About Toho:
Toho Company, Limited, is a Japanese entertainment studio focused on the development, production, exhibition, and distribution of powerful content for motion pictures, television and theater. Founded in 1932, it remains a prominent force in bringing brands and original storytelling with versatile talents to audiences worldwide. Its subsidiaries include Toho Cinemas, the highest grossing exhibition company in Japan. To learn more, visit: www.toho.co.jp/en/.
This message contains information which may be confidential and privileged. Unless you are the intended recipient (or authorized to receive this message for the intended recipient), you may not use, copy, disseminate or disclose to anyone the message or any information contained in the message. If you have received the message in error, please advise the sender by reply e-mail, and delete the message. Thank you very much.

Thanks to Rogers & Cowan for proving Zone Base readers with this news!
Posted by Rob at February 20, 2020