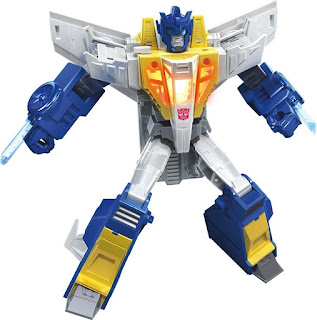 Toy Fair is this weekend, so of course all sorts of news is dribbling out from various sites before the onslaught this weekend. Today's bit of exciting Cyberverse news is a pretty awesome. The new Battle Call figures are slated for release during the second half of this year. That's pretty unfortunate as I want them now. I've been a fan of Cyberverse since it's release and seeing it improve as it goes along is great. These new Battle Call figures are named such as they have voice activated lights and sounds... which I'll likely have turned off most of the time.

What I'm most excited for (other than the cool looking figures) is the cool battle armor. Depending on the size and class of the figure, the armor either flips out or attaches separately. That was called a simple explanation, you'll only get that here folks. I'm a sucker for this type of gimmick. Not only is it super fun to deck your bots out in neat armor bits, but it also tends to improve the looks of the figure a lot. I make a lot of comparisons of Cyberverse to older super robot toys, and with this armor, it's even more apparent. They look straight out of late Japanese G1 or Brave and I love that look.

I really appreciate the new characters. While I've never complained about the regular use of the main cast, it is super cool to see new characters. I really like Wildwheel, it's hard not to love a cowboy and something as silly as a cowboy robot is just fun. The returning characters look great a here as well. It could be a coincidence, but Starscream looks like a mix of Cyclonus and Leozack to me with his feline-ish armor. Megatron's armor pretty much converts him into Galvatron, which is really similar to an unused Action Master concept. Probably unintentional, but cool regardless. 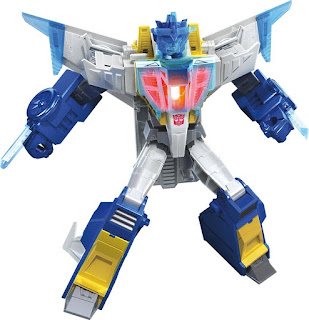