They call him the Streak 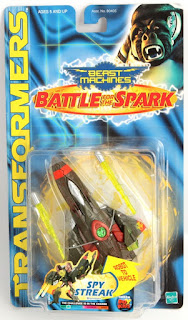 Some of the more cool toys that have come around in the history of Transformers are the non show characters. While this kind of character doesn't happen as much these days, there was a time when they were a good portion of a toy line. In Beast Machines there was some really good figures in the off camera character category. Maybe even better than the main cast folks. Spy Streak was one such toy.

A basic class Vehicon, Spy Streak was a sci fi jet that would look at home in a shoot 'em up video game or a tokusatsu production. Of course being that Vehicons were Cybertronian based vehicles in alt mode, this was a good fit for the theme. In robot mode he had a fun design that fit in with robot designs at the time, while having an alien looking appearance. Simply put, Spy Streak looked like he was from another planet. 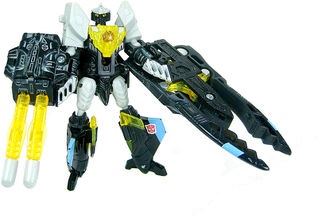 The toy mold got used again in Robots in Disguise (the 2001 line) Nightcruz. Nightcruz was a great repaint with the jet parts being mostly black with white robot bits. Blue and yellow accents with dry brushing bringing out the jets tech detail made for a great looking toy. Released in a cool 3 pack with Scavenger and Mirage GT (also Beast Machines toy molds), the toy fit in with the look of the new molds of the line while helping to add more product to shelves. 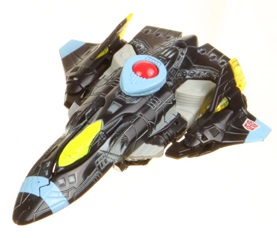 The toy got used one more time a few years later in the original version of Transformers Universe as Fireflight. Now in an awesome white and blue-gray deco with red highlights, this is my favorite version of the toy. While I normally don't mind when a name gets reused, I do wish Fireflight had a more original name to make the figure more than just another repaint. Fireflight came packed with two Mini-Cons to put the toy in the deluxe price class making for a great little set of toys. 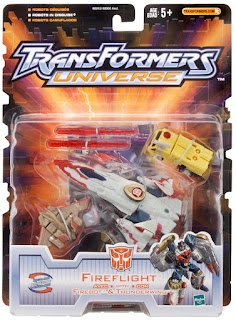 Fictionally non of these great toys got more than a background appearance in BotCon/OTFCC comics. During the 3H fan club, I submitted a bio for Fireflight to the magazine shortly before that clubs demise. At the time I had made him into a version of Randal from Clerks. Looking back now, that was terrible.
3H basic beast machines BotCon deluxe fireflight nightcruz OTFCC rid robots in disguise spy streak Transformers Universe Zone Base