In Transformers, repaints are inevitable. You either deal with it or complain about it endlessly (and generally have your comments muted by everyone else in the thread). Another inevitability is a team of combining construction vehicles will be Devastator at some point. It's going to happen. Fortunately this isn't as boring as some make it out to be (unless a Hasbro rep is around). In the case of the Target exclusive Devastator, it actually resulted in a neat looking toy. 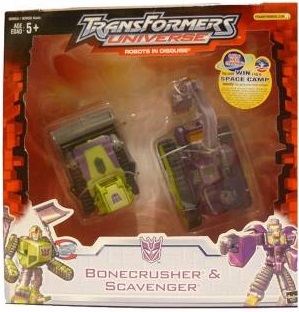 A repaint of the Build Team from Robots in Disguise/Car Robots, Devastator was available at Target in 2006 in two different boxes with two different team members in each. As with the Build Team, this version of the Constructions was a four member team and the three different limb components could be used in whatever configuration with the main body/head component staying the same. I normally used Hightower for the upper body/arms as I felt it made for a more bulky looking robot. 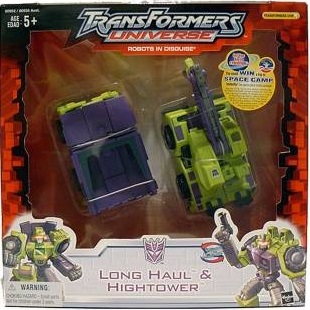 I had already been a fan of the Build Team, so buying this set was a no brainer back then. Not to mention the classic Devastator colors looked great on the toys. A few years earlier a yellow version had been released in a gift set exclusive to Walmart, which served as a G2 version for some fans. The toy hasn't been in any fiction unfortunately. Being the toy was sold in the Universe line, but clearly had the Robots in Disguise logo on the package lead to the 'Ask Vector Prime' page to describe the team as the Build Team from RID that had been reformatted into bad guys. For a short run series like the original RID, little story bits like that are really fun and neat.
at June 19, 2019
Email ThisBlogThis!Share to TwitterShare to FacebookShare to Pinterest
Labels: build team, constructicons, Decepticon, Decepticons, devastator, rid, robots in disguise, Target, Transformers, Universe, Zone Base