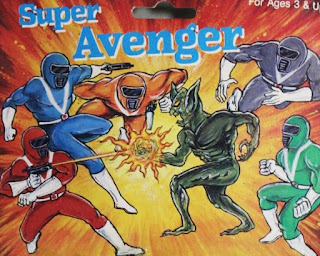 I'm mentally gearing up for Rangerstop this weekend. This morning before I went to sleep, I looked at various keshi and other mini figures and made a mental shopping list. Sure, I hope to score to score a SPD Megazord to make up for that one I never got around to buying or another few particular items, but smaller figures are a focal point for this show.

My first introduction to Rangers was late night viewings of Dynaman on USA. Here was this cool show that was like a combination of Voltron, Godzilla, and video games that was funny as hell. It didn't take me too long to notice the gumball machine toys I would get from the grocery store and other cheap rack toy robots and monsters looked familiar. I was a kid, I didn't know what a bootleg was, but I knew those cool figures in the gumball machines looked like some of these guys. Years later, Power Rangers started up and these guys looked like Dynaman!

Around a year ago I talked about bootleg toys from gumball machines, thanks to those gumball machines and random cheap toy purchases I developed an affinity for smaller figures when it comes to Power Rangers. It wasn't until a little later when I started using the internet to get a full understanding of what these various toys were knock offs of. I had learned what Super Sentai was not long after Power Rangers came out thanks to an extremely informative TV Guide article (that's why they look like Dynaman!) already.

Unlike Transformers where I seemingly buy everything (with especial love for the little bots), I mainly buy smaller Power Ranger toys (outside of the occasional regular toy). That stems from my initial enjoyment of Power Rangers that came from little toys. Even when PR started up and other shows like it came around, I'd gear towards smaller toys of the characters. I'm literally chomping at the bit for the new Fisher Price Ranger toys and have the best time with Micro Morphers right now. Holy crap the level of anticipation for those blind bag Fisher Price Rangers I have is absolutely absurd. That absurdity is thanks to little toys of dubious legality in front of Kroger.