In Armada we Thrust 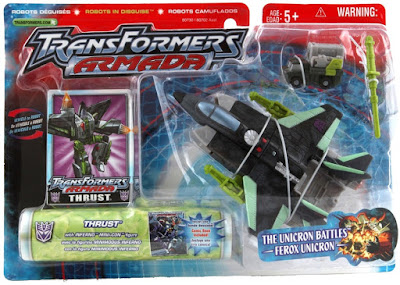 Transformers Armada was a neat line. You had the Mini-Cons adding an extra level of collect-ability and fun to the tried and true Transformers theme. Mini-Cons were available in a variety of colors and would in turn interact with the larger figures in a number of ways. They could plug on and add to the appearance or unlock an action like pop out guns. Sometimes they'd mirror prior gimmicks like Headmasters. The larger figures in Armada were something special themselves. While taking a step back from the hyper articulation of the prior lines, they brought back the chunkiness of G1 and G2 style toys while often being pretty imaginative in the process.

Despite being a Decepticon jet named Thrust, Thrust was one of those pretty imaginative toys. Feeling more like a member of the Predators than a G1 Seeker, Thrust was a neat toy. An F-35 Lightening II in alt mode, he had a cool black deco with silver and green highlights. In the backside of the jet was a loading bay of sorts where his Mini-Con partner Inferno could dock in vehicle mode. This filled out the back more and added a little extra firepower. In robot mode Inferno would empower a spinning blade attack made from the jet wings. As normal, Thrust got a repaint down the line in the 'Powerlinx' named redeco series. 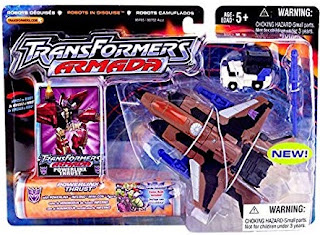 This is where things get funky, you see Powerlinx Thrust was initially shown to be red, but was released in a brown deco despite being red on all art and pictures. This was done late in the planning stages and caused a bit of confusion at the time. Regardless, the brown jet does look good and introduces blue robot parts into the mix creating a unique looking toy. Funnily enough a red version did get released, first in Europe and then as a USA Edition in Japan. 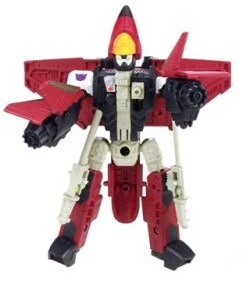 In red Thrust looked more like his G1 namesake while adding white robot parts where the brown had blue with a few small detail differences. At OTFCC 2004 I had an opportunity to purchase one of these red versions. I was invited along with a group of friends to a private room sale where a few cases were available. I don't remember why I declined, but I kinda of regret that now. It sure would have been neat to have, especially during the time when it was perceived as more myth than reality. 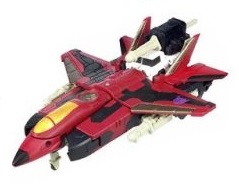 Hasbro wasn't done with the mold just yet, later in Universe (another line I sing the praises of) around early 2004 Walmart had a feature Transformers aisle. While later the large overstock from this aisle became a headache for fans (and probably the employees), it did include a number of exclusive items. One just happened to use the Thrust mold in a rather neat set. 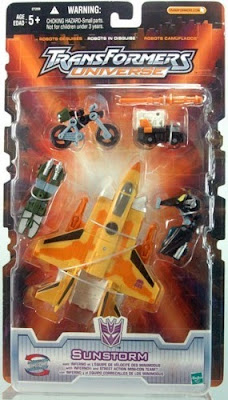 Sunstorm took the mold packaged with a forest green/black version of the Street Action team of Mini-Cons and Inferno. I was quick to jump on this set (as with the other exclusives from the aisle), though many could be found years later marked down on clearance. However this was the last version of the toy, though Thrust did get an homage in Unite Warriors (Takara's version of Combiner Wars).

While you either loved or hated the toy (I was in the loved crowd if you haven't guessed), it got quite a bit of mileage in use. Thrust was heavily featured on the cartoon and has made recent appearances in comics like the Kre-O and Legends manga series (not to mention being in the original Armada comic). Sunstorm appeared in various BotCon/OTFCC fiction as well. You wouldn't have guessed the lasting appeal of Thrust at the time, but that's one of the things that time can do with things.