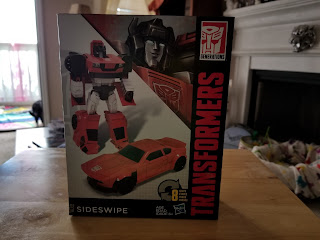 Stopping by a Walgreen's Saturday morning, I was happy to find the new Cyber Battalion Sideswipe toy. I've been really looking forward to getting this guy as he's just plain good looking. I mean look at those colors! I've always been a Sideswipe fan, so a solid new toy of him wasn't a hard sell. One thing I like about Cyber Battalion figures is the box they come in. Many Korean releases come in similar boxes and I've always liked it. 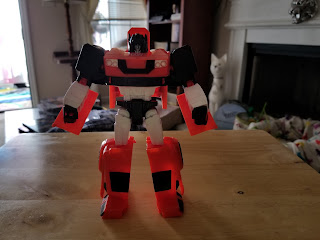 Sideswipe uses the same base skeleton as the Prowl toy, but with new car parts and head. This car mold is one of the better Cyber Battalion toys, so it's a good base for a car bot. Many have noted he looks more like Windcharger, and he sure does look like the Reveal the Shield version of the character. It doesn't really bother me as one of the things I like about Sideswipe is how his basic form is so universal (like Prowl). It just lends itself to being reused as other characters. I coudln't help to notice how close his head is to the MP Sideswipe toy. While there's no mistaking a more simple children's toy for a Masterpiece, that head really looks like the MP head. I wonder if they reused the mold or made a mold from from it (it's happened before). Either way it's a good looking toy. 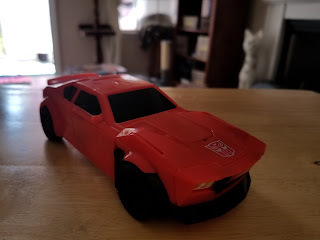 Some folks have a hard time getting around an obvious G1 looking Sideswipe turning into a car that resembles his Robots in Disguise incarnation. To me it looks like a choice made for kids who may recognize the RID version while leaning towards the more traditional (that Evergreen buzzword we've been seeing so much) looking Transformers. Regardless, it looks good. The shape of the cars hood invokes a Lamborghini to me and I wonder if that's intentional. If Cyber Battalion continues, I could easily see this toy (or the Prowl version) being made into other characters as it's such a versatile looking mold.

I like these big chunky figures, there's something really pleasing about them for me and hey... why wouldn't I want that?
Cyber Battalion evergreen g1 generation 1 generation one Generations Prowl Sideswipe Transformers walgreen's Walgreens Zone Base