Voltron could use some defending 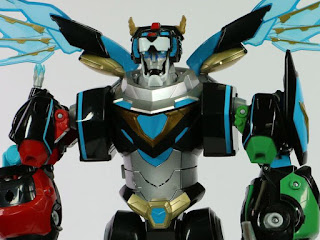 Like some of you, I have noticed Voltron toys disappearing from shelves of my local stores. I wasn't sure why as the line seemed to have been selling well and the new product on display at Toyfair was full of promise. So last week, the upcoming Hyper Phase Voltron was shown as an upcoming San Diego Comic Con exclusive in a box set. I didn't think twice as the MEtal Defender set last year was sold at SDCC before retail. Then as more folks started wondering about the upcoming Paladin figures, one reached out and got the following email. 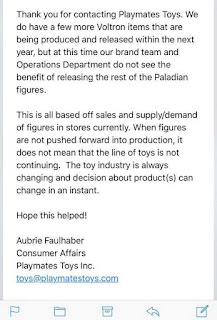 Well, that was a disappointment for the people who were looking forward to building the cast of characters. Many started speculating that the line was outright cancelled, while many said the clearance was just to clear out room for the summer movie toys. Not to mention, the email doesn't say the line is cancelled, just that plans have changed. So a little heartbroken that I may not be able to get any more Voltron toys, I sent Playmates an email myself, asking for some clear information.

So basically, if that SDCC set sells well, they'll look into getting the individual lions out. It really looks like they are trying to get products in stores, and I really hope they do. Like I said, Voltron toys seemed to be selling pretty well around here, and I live in the rural outskirts of a major American city, so it's not the worst gauge to go by.
2018 canceled Defender of the Universe Go Lion Golion Hyper Phase Legendary Defender Lion Force Playmates san diego comic con SDCC super robot super robots Voltron Voltron Legendary Defender Zone Base