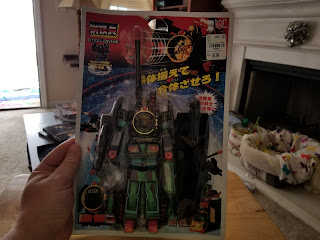 I've never pretended to be the biggest scholar when it comes to Brave. I like it, but I'm not a walking encyclopedia or anything. One thing that has always been part of it's charm is it's odd relation to Transformers. It's Takara's post G1 series that started it's life intended to be a Transformers series and even uses some Transformers molds in it's toy line. The cartoon is very similar to the Takara Transformers cartoons and the toys are from the designers. So basically, it's a continuation of G1 in a  semi sorta way. I have a good number of the toys, but aside from a Death Garry Gun (yes, that's his name, he's also recolor of Sky Garry... yes that's also his name) they're all bootlegs. Bootlegs of Brave toys are pretty rampant in the robot world and can usually be purchased at discount stores.

Unfortunately when it comes to bootleg toys the plastic can vary from pretty ok to a pile of garbage. My Advenger (yes, that's his name) from Tuesday Morning here has kinda oki-ish plastic with a pretty low quality build. So he fell apart instantly as I was removing him from his j-card prison. Fortunately, he went right back together. I'm sure I could fix him easily, but for a 5$ bootleg, I don't know if I'll take the effort. Attempts to transform him became basically putting him back together after twisting a few parts resulted in him falling apart, and I had to put him together with ample cussing. 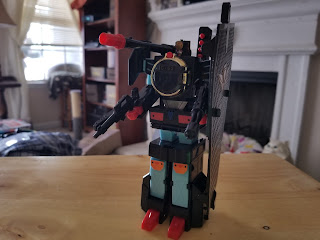 Advenger is still a nice looking robot, even with the cludginess (that's my word for it) that comes with a discount store bootleg robot toy. He has most of his accessories, though his firing rockets are molded in. His shield is a leftover from from an additional train car that the real toy came with that pretty much has nowhere to go when he's transformed into train mode now. Though the hitch to attach the car is there, and his storage for car bots in train mode still works. 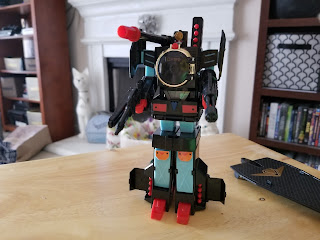 I was actually impressed with some of the bits that actually functioned correctly, his flip out panels for launching gimmicks fold out, though the launching gimmicks are molded in. For a discount store bootleg of a 20 year old toy I'd expect those to be molded over, so it's nice that the small amount of original toy remains even though it's in a neutered state. 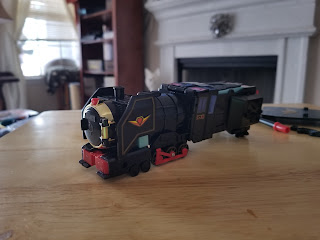 His train mode suffers a bit as it doesn't properly go together. It might, but I'd never know as I had to snap him back together several times to force him into what gets close as possible to a train engine. Though his thighs still flip over to the coal bin in train mode. Which, like the flip out panels in robot mode, I'd figured would have been left out. Advenger can store his accessories in this mode, but Steel Divine just kinda has to leave them behind. I have no clue if the storage works as I could hardly get him to hold together in this mode. 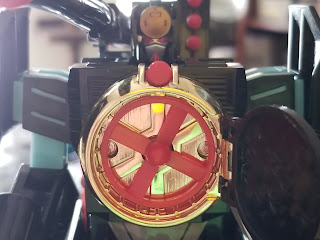 Over all it's still a nice looking robot, and if you can pick up one that holds together correctly (or you take the time to fix it) you'd have a nice enough version of a old toy. Visually they got most of it right, and it has that great late G1 looks. It does make me want a real version of the toy as man it's sharp. So I guess it wasn't a total bummer that it falls apart and I suppose I could spend a little time to fix it up. Maybe.
at May 08, 2018
Email ThisBlogThis!Share to TwitterShare to FacebookShare to Pinterest
Labels: Advenger, bootlegs, brave, g1, generation 1, generation one, Goldran, super robot, super robots, Takara, Transformers, Tuesday Morning, yuusha, Zone Base