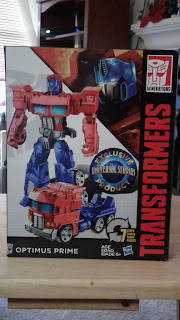 You can't have Transformers without Optimus Prime. I mean, you can try, but he's going to show up. Out of the three Cyber series toys to get the exclusive treatment, Optimus is the most like a legion/legend toy. In fact, he's practically the legion class Optimus Prime toy you can find at your local Family Dollar store with new sculpting and in a larger size. 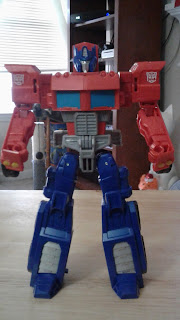 It's a good thing the smaller toy is one of the better legion scale figures. This newer, larger figure is great. He's pleasantly big in hand and feels very sturdy. Being such a homage to the classic G1 Optimus Prime makes this figure perfect for the Transformers ride store. He's a large simple toy that looks enough like the classic Optimus Prime even the most casual park guest fresh off the ride would recognize. 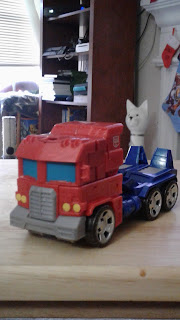 I wish Optimus has a trailer to connect to his truck mode, just to completely sell the classic Prime package all the way. It's a large truck toy that just screams 'PLAY WITH ME'. So, I drove him all over the living room so he'd stop screaming at me. I don't regret it as I had a great time doing so.

Optimus rounds out this batch of toys making for a perfect souvenir of a trip that I was sad to see end. I highly suggest if you ever get the chance to go to Universal Studios and ride the Transformers ride, don't hesitate.

It's a super fun ride that really comes the closest you'll ever come to being in a Transformers adventure. Let alone face to face with Optimus Prime. Not to mention the parks and the entire resort is wonderful. I hope to go again, hopefully sooner than later. It really was just perfect and probably my favorite vacation ever.
at December 03, 2016
Email ThisBlogThis!Share to TwitterShare to FacebookShare to Pinterest
Labels: exclusive, exclusives, g1, generation 1, generation one, Generations, Transformers, Universal Studios