As I've talked about before, some of the Cyber series figures were made as US exclusives in Universal Studios for the Transformers ride store. I've chosen two make each one the subject of a Zone Base post. 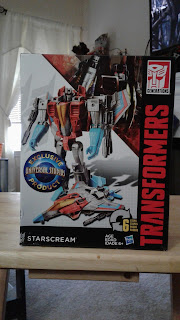 Starscream is one of the more surprising figures out of the three. He's a little larger, a little more complex, and even has guns. While he still is a simpler toy that owes it's design aesthetic to legion/legend class toys. He has a little more 'umph' to him. 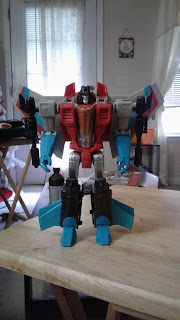 Starscream's signature null ray guns can be removed and held in his hands, which is neat. I've always liked it when seekers held their guns for no particular reason. Starscream also has more color to him, owing to his traditional colors are more elaborate than Bumblebee's. He's a pleasant toy to hold and feels satisfying. I'm pretty happy with this version of the character. 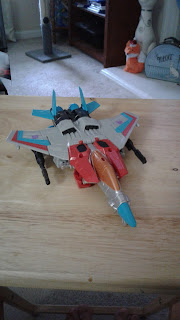 His jet mode is traditional Starscream all the way, but has a little Robotech flavor in its appearance. It almost makes me hope for a Jetfire redeco of the toy. Starscream works really well in this class of toy and also works well for a park guest who just got off the ride. It's classic G1, simple to transform, and pretty much falls into that 'memento of the trip' just rightness to work.
at December 01, 2016
Email ThisBlogThis!Share to TwitterShare to FacebookShare to Pinterest
Labels: exclusive, exclusives, g1, generation 1, generation one, Generations, Universal Studios