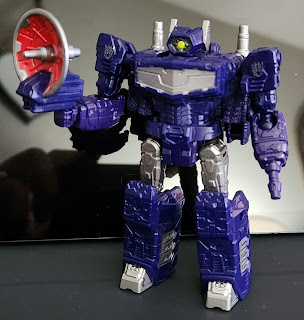 Shockwave has gotten two really good Core Class figures last year. His Studio Series release from the Bumblebee movie was a really good figure that I didn't talk about here (and I may still do so in the future). The latest is this great Legacy figure the Mrs stuck in the pile of presents she gave me this Christmas. The "G1" Shockwave toys have followed the same formula lately with this one doing the same. Very traditional robot mode that turns into a spaceship resembling his classic ray gun alt mode. Like the Legend Class toy from Combiner Wars, this figure has a handle to allow bigger bots to hold the space ship and use it as a ray gun. Shockwave often flew in ray gun mode, so it works well.

Simply put, this is a new toy of a design that's been done a few times already at a smaller size. That's not a bad thing, Shockwave is an Evergreen character that's going to get regular new releases. They're seemingly putting the classic cast into Core Class as a secret lower cost sub-line. Considering they're size compatible with the smaller Authentics figures, it's clearly a thing Hasbro is doing. I can realistically see smaller figures with Deluxe and Voyager sized bigger bots in the future. As someone who's been on the cusp on focusing mainly on smaller Transformers toys many times, I'd be ok with that.

Shockwave pleasantly turns into the aforementioned spaceship. I've generally liked this spaceship as it's got a great classic super robot or shooter game vibe to it. As a Core Class figure, Shockwave is a little smaller than the former Commander/Legend class and a little simpler. It's a general design that's been used regularly, but feels different as a Core. I like it. I like Core Class in general, with Shockwave there's a Convertors or even Gobots energy going on. Obviously I love that. However, Core Class offers more modern engineering perks like better articulation.

Shockwave has a radar dish that mounts on the spaceship and can be held as a weapon. I like to think of it as some kind of scanner. Maybe like that thing Evil Lynn used in the MOTU movie. I vastly prefer the classic cartoon version of Shockwave and can see it as a mobile version of his detection equipment on Cybertron. Just case Megatron calls him while out checking on things. For such a simple toy mean to represent an emotionless bore... it has a lot of personality. 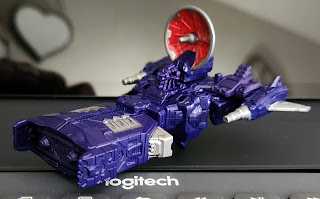