I've been revisiting Gyruss is recent days. It's a classic space shooter game made by Konami released in 1983 as an arcade game. Since then it's been on pretty much every system since. Despite it's age and the many versions on various hardware, there's never been a sequel. That's really weird in gaming, perhaps Gradius and other Konami's shooters fill that role. Still, I wouldn't mind a follow up. The only thing else is a bootleg game called Venus. You know I'm talking about an old arcade game when the subject of bootleg versions comes up.

Game play is pretty standard shooter fair. Though instead of your ship residing in the foreground, it can rotate around the entire screen similar to Tempest. This style of game is called a tube shooter, though it feels more like a hybrid of styles to me in Gyruss. Enemies come in waves as do obstacles with a boss at the end of the levels. Plot is light, you're flying through the solar system ridding the universe of evil along the way. Depending on the version you're playing, Genghis Khan is the main villain behind the forces you're fighting. Don't ask me how Genghis Khan came back as a galactic threat, or where he got all those eyeball space ships... but I dig it. 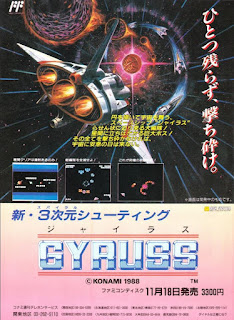