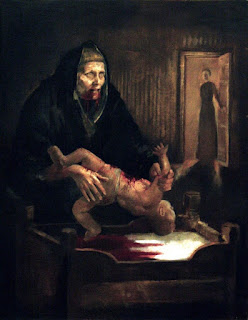 Everyone will bring up Krampus each year. It's to be expected during such a happy and cheery time. Real ones know about Christmas time monsters that terrorize kids and adults alike during the most wonderful time of the year. It used to be time for scary stories after all. Probably one of the most fun Christmastime creeps would be Gryla, the Christmas Witch. In Iceland, she's believed to take naughty children back to her cave and eat them. Her story goes back a long time and has several variations thought history, but that's the general gist of it.

She's not alone either, her kids (or brothers depending on story) tend to cause all sorts of troubles in the homes of these naughty children. They eat the kids back at the cave along with Gryla and her lazy husband. Just like most witches, Gryla has a cat who eats those that didn't get new clothes to wear before Christmas Eve. Suddenly all those socks and crappy sweaters from grandparents don't seem so bad. I think whats really funny, is that thanks to so many parents using Gryla as a way to scare their children into behaving, it was actually against the law for a while. Gryla is still somewhat a common mythological character that terrorizes Iceland during Christmas. That says something to her spookiness that she's been around so long and still somewhat a real world terror to those who hear about her every Christmas. Happy Holidays... if you survive.