You better Axe somebody 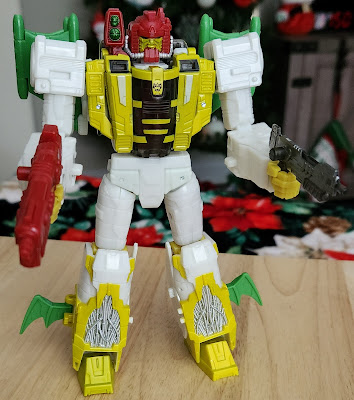 Nothing says Christmas like worrying about getting laid off after it's over. The bot we're looking at today is from that same mindset! Merry Christmas! Jhiaxus debuted in the Marvel Transformers Generation 2 comics. His name being a play on the words 'Gee... axe us' as the comic had really high sales numbers to meet to not get canceled. Like everything else in the G2 comics, Jhiaxus is batshit crazy looking. From the extreme 90's face to that gnarly exposed wiring. The far out design is highlighted with bright colors symbolic of the era. This new toy of Jhiaxus from the Transformers Legacy toy line is a perfect representation of the character in that comic series.

Jhiaxus is a voyager class figure and that larger scale benefits the design quite nicely. His beefed up seeker style body should be imposing. The design just commands to be bigger. Transformation from robot to jet is pretty simple. Everything goes into place where it should without any unnecessary steps. Both modes are really clean too, not much left over kibble from either mode. With a little more features, this could be a higher priced figure. Jhiaxus is pleasantly articulated and packing two guns to properly represent the comics blood lust. It wouldn't be the G2 comic without an insane amount of violence.

I legitimately do not have a single bad thing to say about this toy. Not just because I love Transformers, Generation 2, and the character. It's because this is a really good toy. As we're coming to the end of the year, it's safe to say THIS is my toy of the year. They nailed it. I don't see how another figure of Jhiaxus can beat this one without being a higher priced offering. Even then, I'd be surprised this one's engineering wasn't the base for that supposed higher priced toy. As a Transformers fan from a certain era, this feels like a love letter from Hasbro. There were two other toys of Jhiaxus that were not super great representations of him. This, THIS is what I've been wanting since his introduction in 1993. 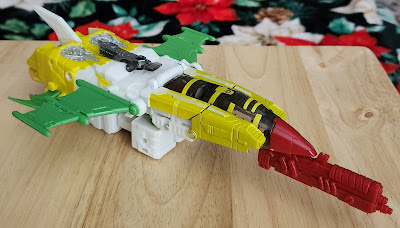