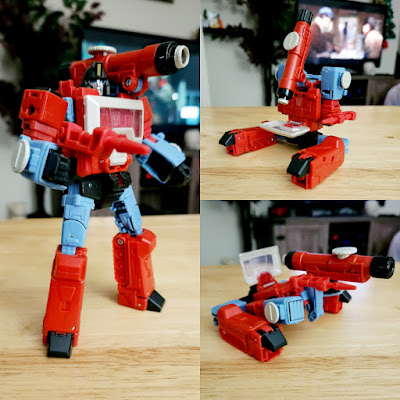 I've always liked Perceptor. There's just something charming about him. Before we go any further, I vastly prefer the cartoon version to the newer sniper version. This isn't a battle line to fight over, just a preference. That's why we'll be looking at the Studio Series 86 figure of Perceptor toy. I got it a few months ago, that ever growing backlog keeps getting bigger. If this was a review site, I'd be more hard pressed to get posts out about certain toys faster. That's just not what I do here though.

What I'm doing here though (today anyway) is looking at this newer figure of a classic character. It's a really solid update of Perceptor. Like other newer updates of classic Transformers, Perceptor looks like he just walked off a cartoon screen. He's pleasantly articulated and has the gun you expect him to have. Of course a microscope is the alt mode and just like always... it's not the most accurate microscope, but it'll do. Once again, it looks like how you'd expect it too. The tank mode (yes, he was always a triple changer) is right along with the same accuracy to the original. I don't know if it could fit a Microman, maybe something smaller. I didn't test that out. I could see a Mega Construx figure sliding in there without any issue.

This is really just a new update. That doesn't bother me and Perceptor is a character I'll always appreciate getting a new toy. The last one can out 5 years ago. Not the worst timing for another new figure. I've always liked his reds and blues. The bright colors really pop against such a rigid looking robot design. His design always reflected his personality to me in that way. Perceptor is this really smart bookworm who'll give you the most elaborate answer you didn't want. Then he'll drop something and say "oh dear" before hitting his head. That design is the genius, the color is the silly. I never outright desired a microscope that also turned into a tank and a robot... but I learned a long time ago that one was necessary.