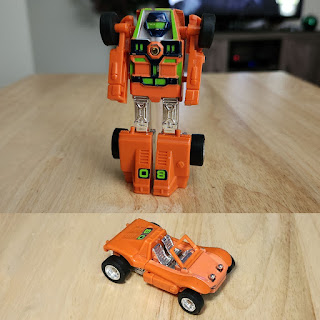 I've been wanting to talk about Buggyman for awhile now. Buggyman is a Gobot that doesn't get included often when the subject of Gobots comes up. He's not one of the main characters, so that's understandable. Gobot's have a lot of different toys and were released under a bunch of different lines. I don't know everything about them... nobody really does. The best you can do use use the references available. However, back to Buggyman. He's a pretty charming little guy. Pretty much what I think of when thinking of Gobots. He's got the signature look. This is the second version of Buggyman in Gobots, the first is in blue. I actually tried to go over the variations in a recent TikTok I made on this toy. Let's watch that real quick.

Honestly I'd make more videos more often, but spare time is a fleeting thing. I don't think I'm writing this posts intention to talk about Buggyman in the same way you'd talk about a toy in a review. I don't think I do reviews... I mean... it's a purely subjective subject. What's my qualifications, or anyone else's to decide if a toy is good or not? I really just want to talk about Gobots and Buggyman is going to be my example for today. Ya'll dig? I'm going to put pictures of Buggyman in for the people who don't read and just skim over the pics. They'll never know. The actual post will just be our thing. Post readers club... somebody make a hand sign and we'll all do it.

I said Buggyman (damn, that's a fun name) was what I thought when thinking of Gobots. That means a few things. First... look at that face. That's the quintessential Gobot face. It's similar to several others across all the Machine Robo/Gobot robots. That goes for that box around his head as well. Despite what Buggyman turns into (a dune buggy, it's in his name), he absolutely looks like a standard issue Gobot. All the design bullet points are met. You may second guess an oddball robot here or there, but this is definitely a Gobot on sight. Also a great example of why Gobots are so fun. The wonderful die-cast, that traditional Bandai look, those rubber tires. For what was intended to be an inexpensive toy, Buggyman is pretty high quality.

Then there's the influence, intended or not. I loved Mini-Cons when they were first released. Still do. Not only did they remind me of Micromasters... but they also reminded me of Gobots. Take Ironhide for example... it's almost a tiny recreation of Buggyman. All those random alt modes and the mixture of unique and traditional robot modes. They were almost a Machine Robo line nestled in a Transformers line. Ironically the two brands were heated competitors at the time with robot fans winning in the end.