Oh shit! What are we going to do now? 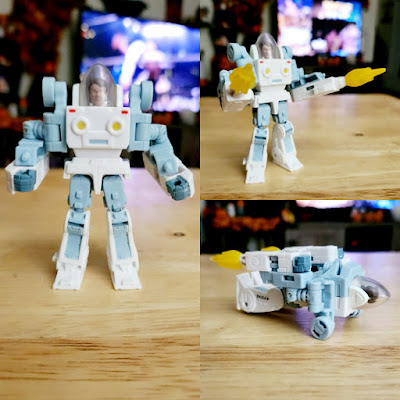 I was really excited to get the new Spike figure from the Transformers Studio Series 86 line. Not just because I really enjoy Transformers, the 1986 movie, the Studio Series line, Core Class, and everything else related to Transformers. No... well that's not just why. Spike also looked really cool. As someone who grew up with various sci fi/fantasy toys from the 80's and never left them behind (as you can see), Spike feels like a culmination of those ideas into a neat little figure.

Spike, of course, represents his appearance in the 1986 Transformers movie decked out in his Exo-Suit. As seen in the movie, the suit has an attack mode as well as a vehicle mode that the figure pulls off pretty well. Before I go any further, let me just say that I REALLY like this figure. So I have nothing bad to say AT ALL. He is fairly articulated for a figure at his size and price. For a change, I really dig the included blast effects. I usually take them as a novelty and don't think much of them. Here's they represent the rocket fire from the vehicle modes booster pods. In attack mode, they're the blaster fire! That's nothing new... but it really did it for me this time.

Spike really feels like a natural evolution of Takara SF. All that old Microman and Diaclone art really seemed to be reflected in the 1986 Transformers movie and subsequent seasons. Honestly, if I were in the position to make convention or store exclusives, Spike would get made into a new Microman figure. Some of you are probably glad I'll never be in that position. I want repaints of this toy. Give me a Buzzworthy Bumblebee version in weird 'stealth' colors. They already use the Micronauts font in that line anyway. Let me find some weird knock off of this figure. I want that grind house feel of bootleg robot toys on this mold. I just envisioned a bootleg line where this figure is another character ala Inter-Changeables. Spike is a great version of his appearance in the 1986 movie and the culmination of so much more.