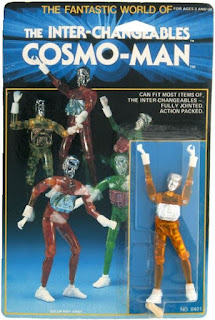 Inner Space has been on my mind lately. I've always been a fan of this particular part of Transformers, even before I knew it was part of Transformers. I was just a kid playing with his Pocket Super Heroes and Buck Rogers figures and those neat shiny head guys sure were cool. A weird thing with toy molds is that they often live strange lives. MEGO wasn't the only company to reuse Micronaut molds. There was Lords of Light and Inter-Changeables for example. Unlike Lords of Light (I'll talk about those later), The Inter-Changeables were almost identical to Micronauts/Microman. Considering the packaging and presentation, you'd almost expect them to be a new series by MEGO.

They weren't, but you'd swear they were and I think that was the intention. Note the hint about joint compatibility on the package above for Cosmo-Man, the new version of the classic Time Traveler figure. Released by Hourtoy for the first series and the second series by M&D Toys, the figures were near identical with just some different colors and names. However these were no bootleg toys, the molds were licensed by Takara (or were they? check down in the comments). I've seen others speculate that there's a MEGO connection. Maybe? They're odd for sure, but I've always appreciated the weirder aspects of these things.