For the longest time, the Transformers Jumpstarters were generally pooped on by most folks in the Transformers fan world. I'm not sure why, I've always thought they were neat. I tend to gravitate towards super robot flavored space robots and that's exactly what the Jumpstarters are. They seemingly come from other DNA than the original batch of Diaclone and Microman robots. However, they were originally Diaclone toys and ironically some widely accepted original G1 bots like Windcharger hail from the Mysterians before being Microman figures. It's weird how Top Spin and Twin Twist feel like distant cousins despite being in the direct lineage.

I suppose it's the simple transformation that turns off a lot of folks, that gimmick based play pattern. Admittedly the complexity of the transformation has never mattered much to me. Sure, if it's ingenious... I'll appreciate it. I'm more concerned with the individual modes more than the trip from A to B for the most part. That being said, the pull back engine resulting in the jet flipping and transforming mid-air was always fun for me. Seeing it spotlighted in the commercial, obviously that's the focal point. Sometimes a toy isn't necessarily the physical thing, but how you interact with it.

The Jumpstarters are more popular these days than they were in the past. Newer figures are well sought after, but I think the original G1 toys can still be gotten very cheap. I clearly remember cardboard boxes with loose ones at older BotCons and buying a couple for a dollar each. Some of the knock offs and international versions are more popular than the original duo out of neatness. That new Diaclone colors version of Twin Twist has been pretty popular. Part of me hopes to see them as gimmick toys in something like Earthspark. I'd like to think in today's world of gimmick heavy children's toys that they'd be a hit. There was those Avengers Transformers that mirrored the gimmick a while back after all. 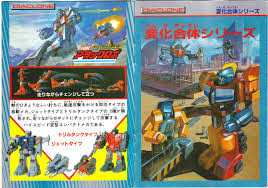