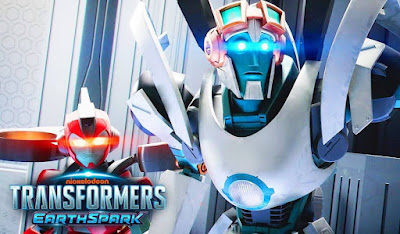 Transformers Earthspark, the newest TF cartoon, premiered today on Paramount Plus. The first episode was available via a few sneak peaks that I wasn't privy to and the pirated copy floating around on Facebook that big name sites hid behind click bait links... I never had time to watch. It's an extremely busy time for me and things happen. I did manage to watch a few episodes of Earthspark today and want to talk about it a minute because I really liked it. I had been looking forward to the show and am really glad that it's turned out so good.

I won't intentionally get into spoilers, the show just came out and I'm sure you'd rather find out stuff for yourself. I will talk about things I feel are fair to talk about publicly. Lot's of this is already out as part of the marketing blitz, so you probably know most of it already. The basic premise is that the Autobot/Decepticon war is over. Megatron has joined up with Optimus Prime and other Autobots as part of an X-Files style government organization called G.H.O.S.T. that are gathering up all the remaining Decepticons that are still doing bad guy stuff.

Over the years, the Transformers on Earth have built up a fandom among mankind. The Malto family (who's mother is a member of G.H.O.S.T. and father is an adult TF fanboy... I feel seen) have taken in two new Earth born Transformers (a new group named Terrans) and are raising them as their own. Bumblebee is also staying with the Malto family to help train these young Transformers. There's an evil scientist the Terrans named Mandroid who has an army of robot spiders called the Arachnamechs whose also working with the remaining Decepticons causing trouble.

I can't put into words just how fun this show is. I'm not just saying that, I don't get any review samples or any kind of reimbursement from official sources. This isn't some big name site full of adds and sponsorships. It's a podunk fan blog that anyone could do. I'm a fan just like you reading this and I REALLY like this show. It's well written, funny, and full of action. Visually the series follows a G1 feeling origin, but isn't a direct follow up to the old G1 cartoon. It's in that surface level traditional Transformers that Hasbro has been doing lately. You squint and it looks close enough, but isn't it actually.

This is a cartoon intended for children and any adult fans who enjoy it is a bonus. The point of me saying that is... you can't expect a new show premiering in 2022 to closely be in continuity to a nearly 40 year old cartoon. Sure others have done that sort of thing... but not often. This is close enough in what I call a 'greeting card' sense. That's Optimus Prime and the other Transformers that have been around all this time. Things have changed, but that's them. That's the approach and... it works. The cartoon is a CGI series with some traditional elements. The flashback scenes which lovingly recreate the classic cartoon, for example, are 2D animation. It makes for a nice juxtaposition of eras.

One thing I'm enjoying visually is that the CGI looks more like a claymation/stop motion production. That's really appealing to me. One think I don't like is some of the faces. Optimus Prime, for example, looks uncomfortable. His face is just odd looking and I can't really explain it. It's not an uncanny valley sort of thing, just weird. When his face plate is up, that sort of helps. However the plate is too big and overall a little jarring. Maybe it's just me. Maybe that'll smooth out in future episodes or I'll get used to it. It's not every character either, just here and there with the cursed faces. If a few weird visuals is my only complaint... then that's not bad. Nothings perfect and children's shows intended to sell toys are rarely without issues. I'll gladly take a few weird faces.

The toys are supposedly rolling out. I've seen some already in the hands of other fans and frankly... I'm jealous. I'm super excited for this series even with Legacy already filling me with joy as is. With Rise of the Beasts around the corner it's really awesome to be this happy and excited about things. I hope things continue on this positive trend and Earthspark keeps on being a positive Transformers series. I look forward to gushing over it in the future and enjoying it with you all. It's hard not to be happy like this.