Bonk at the Moon 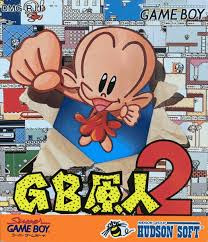 King Drool III has stolen precisely half of the moon and it's up to Bonk to save the day! I'm not exactly sure how he plans to reassemble the moon once the task is done, but it probably involves bonking it back into place with that big old noggin. I'm specifically talking about the Game Boy version of Bonk's Revenge even though all the versions have the same plot. Bonk games are generally fun platform games with colorful graphics, and weird characters/locations. The series established itself on the PC Engine/TurboGrafx-16 before moving to other platforms. I'm quite fond of the Game Boy (it could be my all time favorite system), so I tend to focus on those particular Bonk games.

If you've never played a Bonk game, they're platforming with plenty of jumping around. You collect smiley faces which work like coins in a Mario title. Bonk is a caveman with an enormous head which is used to 'bonk' enemies with. He also can 'bonk' while jumping which causes him to flip about and float. This is pretty useful in reaching hard to get smiley faces. Bonk also will bite surfaces to climb. Flowers can be used as springboards for big jumps, but the bulk of flowers provide hearts or meats. Hearts refill Bonk's life meter while meats give him power-ups.

Power-ups in the Game Boy version (that we're talking about today) are 'Master Bonk' is our hero with pointy ears and a cape. Master Bonk is faster and can jump higher. 'Hungry Bonk' is crazy looking and can bite enemies to death and has a much stronger 'bonk'. 'Stealth Bonk' is in a striped jail outfit and can enter the various locked doors throughout the game. These doors either lead to smiley faces, meats, or jail where Bonk will loose some smiley faces.

The upgrades are random and are lost when getting hit. Theres also tulips scattered about that'll transport Bonk to bonus areas where he must face off against Mechabonk. Winning results in an extra life, loosing transforms him into 'Wounded Bonk'. Wounded Bonk is dressed like a mummy and takes twice as much damage as usual. Needless to say this form doesn't revert after a single hit, instead results in a pretty quick death. Speaking of deaths, there is a password feature.

Bonk makes for a pretty good portable game series. While I tend to play portable games with a TV or radio on in the background while relaxing, they're obviously played mostly on the go. The more simple game play is perfect for these situations where your attention may be divided, but don't let that simplicity fool you. They're normally pretty robust and satisfying experiences. Bonk himself seems perfect for a smaller screen size and I have a good bit of fun with him on the trusty old Game Boy.