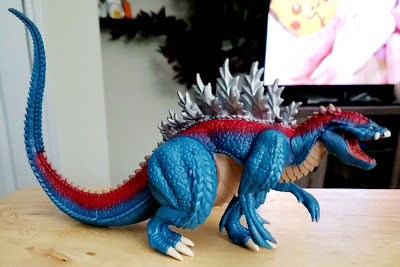 Godzilla Terrestris is the third form Godzilla takes in the Netflix series Godzilla: Singular Point. Like in Shin Godzilla, the monster takes multiple forms as the story line progrerssises. The there is four forms alltogehrt, with this one nearing a more traditional look and uses a mix of the roar from Godzilla 1984 and the Millinium series. Today we'll be taking a look at the new Playmates figure of this particular Godzilla. I've had it a few weeks now (as noted in a prior Weekly Update), but have been obviously busy with the Pumpkin Spiced Mayhem.

It probably goes without saying that I really like the blue coloring. It doesn't look like a traditional Godzilla, obviously, but makes for a cool looking monster (that comes later). Godzilla is more of a mythical creature in Singular Point and that comes into play with the design. To me it looks like a cross between a dragon and the Godzilla 1998/Zilla design. It's a neat look overall. My wife outright didn't think it wasn't Godzilla when I picked it up at Target. That's how different looking these earlier forms are. I'm in the middle of liking that and not liking that. I do think it's neat looking, while also wishing it was a little more traditional. It's not a deal breaker either way.

You may have noticed the paint apps end towards the end of the tail. They just do. It's screen accurate, but a little blunt in the way it stops. It looks like there should be a transition there as it changes tone. The Bandai figures do the same way. That's really my only complaint with the toy/design. That red on teal looks so great, it just feels liek a book slamming close when it stops. I like to think of it as a visualization of the sheild he creates from his own blood. I don't know why more recent versions of Godzilla uses blood so much... but I kinda dig it.

Like your standard kaiju toy, Godzilla have articulation in the arms and legs with swivels in the head, and tail. The legs movement is more for stabilization as is the tail's pose. He does have some tiny arms compared to that bulky body. This of course is part of the overall design and not a shortcoming of the toy. It's actually a REALLY good representation of Godzilla's on screen appearance in the Terrestris form. I've noted before about my admiration for these Playmates Godzilla toys and readers might remember the gradual improvement the line has made since it's shaky initial waves in 2020. The Singular Point designs may not be your cup of tea and that's fair. I really like the dragon like appearance and love that bright blue. This is a pretty big and bulky toy that nails the character's look for only $12. I can't even buy lunch for that anymore.