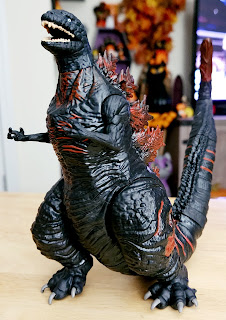 I've got a few Shin Godzilla toys, this is the newest. Playmates decided to improve upon their prior toy with this vastly improved figure. I really like it. It's Shin Goiji in all his glory... but safe to sell next to other toys on the aisle. Just a little toned down, you know? I've said it before... and I'm saying it again. I REALLY like the Playmates Godzilla toys. Not to mention, it's been neat watching the rocky start to the more polished current toys. Godzilla (2016) as they label Shin Godzilla, like I said is a great representation of that timeline. The first Playmates Shin was a bit of a mess, a mess that I found some charm in, but still a mess. This is a more refined figure and sculpt.

This is a bulkier figure that represents Godzilla in his Shin Japan Heroes Universe depiction pretty well, though a little toned down as I said before. It's a pretty scary version of Godzilla and they're selling these next to Batman figures at my local Walmart. Though he's still pretty accurate and a good representation. Shin has a few points of articulation, what you'd expect from a sofubi style kaiju toy. Basic arms, legs, head, and tail articulation with some ankle swivel for stabilization. As with the prior Playmates kaiju, he's a harder vinyl, but still fits right in with your Bandai soft vinyl toys.

The paint looks pretty good, maybe a bit simple, but still looks good. Sometimes less is more and with a layered look like Shin Goiji has it'd be pretty tricky to nail at this figures price range (around 12-13 bucks). Still they managed to get that crispy scaly look down with some red cracks and highlights in the fins. I do wish the second head at the end of his tail would have more detail... but that's such a small detail that it doesn't hurt to not highlight it much. Like I said, they curbed the freakishness a little. I don't think all those skeletons would have made for an ideal kids toy. Regardless, it still looks good and looks like Shin Godzilla without any question. It's a great figure of a scary monster idea for kids or adults.