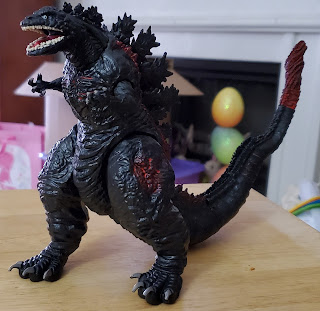 The other day I found Godzilla 2016/Shin Godzilla from the Playmates Godzilla and Kong line. I had been looking for this guy as his face sculpt has been in multiple memes in kaiju groups. Despite the many jokes... in person it ain't so bad. Silly, sure, but a little better paint detail could fix that. Really it's a pretty decent sculpt full of Shin's gnarly features.

Like the prior Playmates toys, Shin is a hard vinyl toy. He feels more like an action figure than a sofubi, but fits right on in next to my Bandai Creations toys. I prefer sofubi toys for my kaiju, so this is welcome. You really can't complain about walking into your local Walmart and buying a Godzilla for $12. Unless you're an asshole. 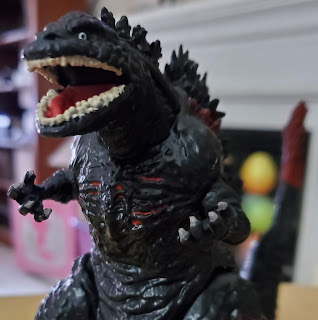 Shin is in his 4th form from the movie as it's the 'adult' version of the character and most recognizable. Sure, he's a gnarly mutant, but still looks like Godzilla. My last toy of him was the 2nd 'baby' form from Bandai's 65th Anniversary boxed series (I really need to get the rest of those) and before that was Necca's Atomic Blast figure. He's not my favorite incarnation, but I sure do like him. Know that song 'Life is a Highway'? Love it.

Shin's  got some decent articulation. His head and little grubby arms move as do his legs and tail. He actually has ankle swivels, which help stabilize the toy when standing. The tail is segmented in 2 parts and can move around a touch. Not enough to point the second head in his tail at anything (it's a weird movie), but you can adjust him enough to not fall over. You'd think with the bulk of his design in the legs and tail he'd have a more stable center of gravity. It's not really much to complain about and despite initially wanting this toy due to silliness, I've found myself liking it quite a bit.